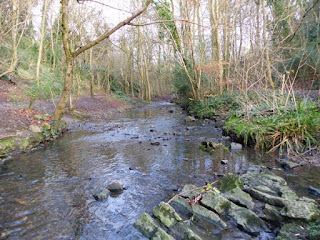 As I write, Saturday afternoon 20th Feb, it's very windy outside, approximately 50mph and also raining. The weather is very changeable at the moment and we were fortunate this morning because there was little wind and rain. We cleared litter from the stream and its banks from the Lakewood Road entrance as far as and beyond the Chestnut Bench with the spider carving.
We also cleared this area which is looking from near the Westbury Wildlife Park towards the Triangle (when the weather was more clement).
Because of the rain we've had in recent weeks there is a lot of mud on some of the routes and it is a lot easier when there is a frost. 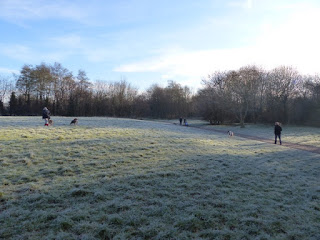 We have had plenty of frosty mornings. It's a pleasure to be out when there is a clear blue sky, frosty, glistening grass and the sun gradually spreading across the tops of the trees and then the meadows.
The birds too seem to appreciate the sun's first warm rays of the morning and on Thursday we were serenaded by a Song Thrush high in one of the trees over the tumulus. It's a beautiful song and can be recognised by the repetition of single phrases three or four times. If you'd like to see and hear the Song Thrush try these two sites. click here first then here. 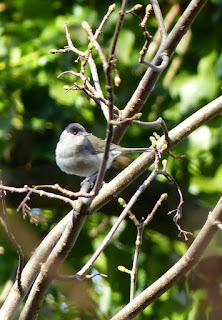 I was also pleasantly surprised on Thursday to see this little chap near the Lakewood Road entrance to the wood and before the carved bench. It's a male Blackcap. It's easy to see how it got its name. It's not rare but not often seen. During the winter the Blackcap is sometimes seen around gardens but because it's been a mild winter it hasn't been such a frequent visitor. In fact I haven't seen one in the garden this winter at all and we normally do. The female has a reddish-brown cap. This is another bird with a lovely song and worth listening for. The population increases during the summer as birds arrive from Northern Europe and it is one bird where the British population is increasing. It seems that more birds are staying over the winter. Click the link to hear the song and to see some video, Blackcap audio and video. 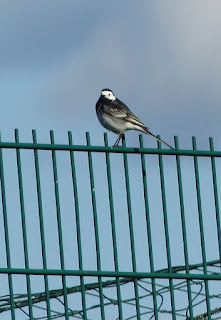 We see two types of wagtail in Badock's Wood. This black & white bird on the left is, naturally, the Pied Wagtail. It's a bird commonly seen around open spaces such as car parks and park land. This one is perched on the fence by the ceramics. They mainly feed on insects and so you often see them darting about catching flies and midges.
The other wagtail often seen in the wood is the Grey Wagtail (photo below). Many walkers have seen it feeding on midges and water creatures along the stream. It's usually seen sitting on a stone watching for an insect or searching among the plants at the edge of the stream and this one was near the Triangle.
The Pied Wagtail is just black & white but the Grey Wagtail often has some yellow on its underparts and this one at the base of the tail.

The third type of wagtail is the Yellow Wagtail which has more yellow than the Grey. It has yellow on the head and can have olive green upper parts although there are differences between male and female. I've not heard of anyone seeing a Yellow Wagtail in Badock's Wood but there are records on the internet of them being seen in Bristol during 2015. In the grey and Yellow Wagtail the male is much more yellow in the breeding season than the female. This difference in the sexes is called sexual dimorphism and is a great help in telling the sexes apart. Not all birds show a difference; the robin for example shows very little or no detectable difference. In fact if you want to know the sex of some cage birds for breeding, parrots for instance, it is necessary to either use an endoscope or do DNA testing on a feather. Those birds show sexual monomorphism. To see a Yellow Wagtail, look at the RSPB website and from that page there are links to Pied and Grey wagtail: RSPB website.

The very windy, wet weather has carried over to Sunday but there are definite signs that Spring is on 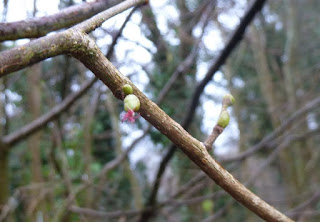 the way. Of course flowering started early and we now have snowdrops and celandines in the wood. There are also many bluebell leaves and the flowers won't be far behind.
There are now female flowers on the hazel. It's worth walking over to a hazel tree, look for the catkins, to search for the small red female flowers. These have to catch the male pollen from the dusty catkins in order to produce the fruit, hazel nuts. There seem to be fewer female flowers than catkins but it's worth the search. It's easy to confuse the hazel with alder so if you see small cones on the tree it will be an alder. I managed to get this photo from a Hazel tree in the meadow but there are more and better photos in Google images.

I was in Tilgate Park in Sussex last week and saw a grey squirrel stuffing dry, dead leaves into its mouth with both paws. I'd not seen this before and supposed it was carrying it to a drey so I watched carefully. It didn't seem at all timid. Once it could carry no more it dashed to the nearby tree and rushed straight up the trunk and into a 'woodpecker' hole. I waited patiently for a while to get a photo of it leaving but it was presumably busy making its home as comfortable as possible for any young that might be produced during the spring. I was pleased that my daughter and grandchildren were with me to see it. 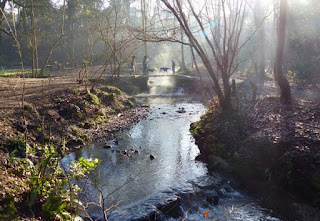 It's odd to walk down to the Triangle from the Lakewood Road entrance on a cold morning to see a mist rising from the stream. I assume that this happens because the water coming down from the entrance is warmer than the air above it. It can seem quite atmospheric when viewing it into the sun. I took this photo on a chilly morning last week. 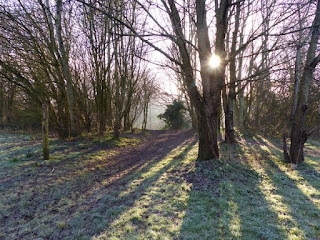 On Saturday 27th there will be a Riverbank Litter Pick event organised by Bristol Avon River Trust and Friends of Badock's Wood. There will also be an activity to emphasise the importance of reducing the pollution in our waterways. Whether you'd like to be involved or only come to see what it's all about then just turn up at the Doncaster Road entrance to Trymside Open Space (opposite the smaller of the Doncaster Road entrances) at 2pm. Instruction and equipment will be available. 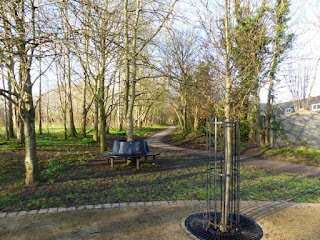 The Bristol Natural History Consortium are  giving awards to people and projects that benefit our Green Spaces. I feel that the Friends of Badock's Wood, as a group, deserve congratulations for the work they've done over the last 15 to 20 years in improving and maintaining Badock's Wood as a Local Nature Reserve. I have been involved with the group for less than a year but I can see, and many others have mentioned the good work that the FOBW has done over the years. If you would like to see the BNHC website and possibly nominate FOBW, or any other person or organisation, then have a look  here. . 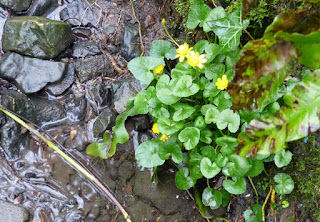