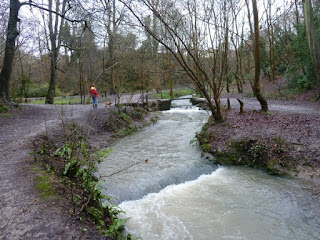 We'd had strong winds and heavy rain overnight when I went for a walk Wednesday morning (9th March). Muddy in places but plenty of life in the river. I was listening to the wind in the tree tops and watching them sway and I noticed that the song thrush's song wasn't as relaxed as usual. Not really surprising because he was up there amongst all the action.
It was a lovely morning for a walk as long as you were dressed for it and I was enjoying it. 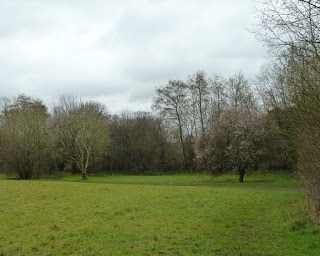 I got into conversation with someone about what a gem the woods are and how lucky we are to have it here in this part of the city.
But then I was surprised when he said that he didn't believe in picking up after his dog. I don't think anyone had actually said that to me in the woods before. Of course I know some people don't do it but nobody has actually said it to me. Even when I explained that people can become blind from contact with dog faeces he was unmoved. It wasn't the time or place for a lengthy debate but it gave me cause for thought. I am grateful to the vast majority of dog walkers who do pick up after their dog. The place would be unbearable even for dogs if only half the faeces was cleared. If anyone needs convincing of the importance of picking up after their dog here are a couple of interesting links. Why pick up 1?   Why pick up 2 ? 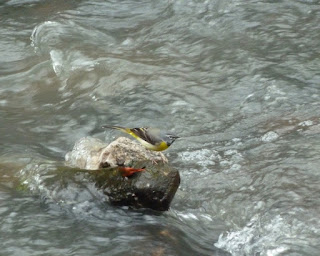 After a while I recovered my calm and was able to focus on the beauty of the wood again. I put in the photo of this grey wagtail because it was the first one I'd seen this year with a black bib.  This is the summer plumage of the male. He'll be thinking about territory and looking for a grey wagtail that hasn't got a black bib. Next time you see one look for the bib. Actually within minutes of seeing this bird I saw the sparrowhawk again gliding between the trees so these smaller birds mustn't get too distracted or they'll be on the menu. 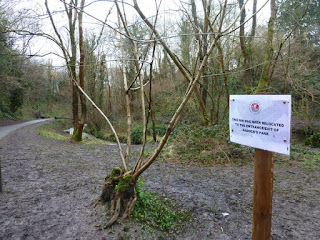 Now for the competition.There are two mistakes in this notice but I'll let you have the satisfaction of finding them for yourself. The answer will come later but look closely at the wording.
Meanwhile, lush green leaves of wild garlic are beginning to fill in the bare areas of the wood's muddy floor. Soon I am sure the wood will be filled with the familiar smell and then the white flowers will appear. Whereas we normally buy garlic cloves for cooking, when it comes to wild garlic it is the lush leaves that are the most useful. I know people do use them for cooking but given our previous subject any garlic from Badock's Wood will need a very thorough wash. 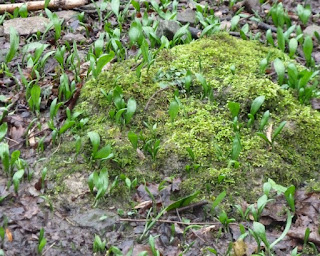 Almost every year someone in the UK mistakes Lily of the Valley or some other plant for garlic and this can have a fatal outcome so care is needed when picking it.
You can see from the photo that the garlic leaves are at an early stage but already with the moss and Hart's Tongue Fern they are giving the wood a touch of Spring. 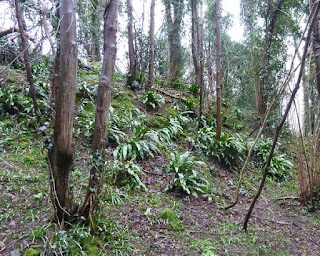 There is a lot of Hart's Tongue on some slopes of the wood and this is a sign that not much light is reaching the ground. This year there will be a program of removing some trees and thinning others to allow more light in and so more ground cover and more variety of smaller plants. You might see orange, pink and green marks on trees that are destined to be removed during the year. The selection of trees has been carried out by a tree specialist. In fact this might have to be postponed until the end of the year because it is illegal to disturb nesting birds and of course you will see that many birds are carrying nesting materials already. For a brief note on the relevant law see here.
The two mistakes on the sign might appear trivial at first but they do have a greater significance.
The first is a trick question because despite what the sign says, the bin was removed completely, it wasn't 'relocated'. The bins at the wood entrances were already there. The second mistake is that it is Badock's Wood and not Badock's Park. Again this might seem trivial but there are important differences in the way that Parks and Woods are treated by the Council and in the way in which they are developed. Badock's Wood was designated a Local Nature Reserve in 2008 only after a lot of work by the FOBW. Certainly the emphasis underlying the Management Plan of Badock's Wood is to maintain it in as natural a condition as possible. For many people this is the essence of its attraction. 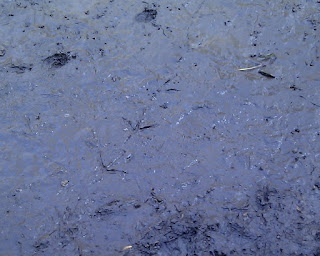 This photo of bird tracks was sent to me by Graham Mullen, the webmaster for the Friends of Badock's Wood website. We don't see many water birds in the wood during the day because of the number of dogs visiting. I would have been puzzled but I did see a moorhen a couple of weeks ago at the Doncaster Road end of the Trym and the tracks look exactly like the ones  for moorhen on the internet: see here.
They are clearly not webbed as would be the case for a mallard or gull. If you are in the wood at a quiet time of day you might see moorhen or mallard so keep a watch.
Until fairly recently I thought that animal spoor only referred to their 'droppings'. In fact it refers to any trace that animals or birds leave behind such as these tracks. It can also refer to broken twigs or scent. See a definition.  If you're interested in looking for signs that wildlife leave behind then you might like to see The Nature Trackers Handbook by Nick Baker. It's fun just to read and a good gift for budding nature enthusiasts. See here. 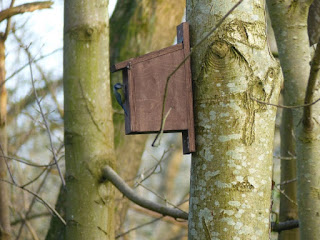 I was pleased to see on Sunday morning (13th March) that at least two of our newer bird boxes are attracting attention. It's too early to say that the birds have taken up residence. Each box has a number which you can just see in the photos. So this is 5 Lakewood End. It is just inside the Lakewood Road entrance on the left. A bluetit also went into No 7 Meadow View.There are 20 of these newer boxes around the wood and a few older ones, so keep a watch out for them and see if they are being used. Particularly if you see birds carrying nesting material to them.

Spring is a time of year when so much is happening in nature and it's romantic to think that the Wood is waking up after a long winter. Although we haven't had long periods of freezing weather or lots of snow, it has been a mild, damp winter and it is good to have a few days of clear skies and some warmth from the sun.  The floor of the Wood is certainly becoming greener with each passing day and leaf buds and blossom are opening on the trees. There is a lot of bird song and activity as they compete for territory and for mates, as well as thinking about finding a suitable site and then enough nesting material to build.
Now is a good time for us to get out into the woods with eyes and ears open to see what is happening all around us.