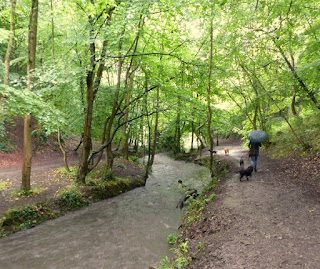 Last week I was saying how dry the stream was. Well, yesterday afternoon, Thursday June 16th I was caught in a downpour. I was wearing shorts and trainers but fortunately also had an umbrella and I didn't get too wet. In fact Badock's Wood is a marvellous place to be in the rain. It's very peaceful and relaxing. The level of the river rises and falls quickly because the water derives largely from road run-off  and also because of the previously mentioned swallet.
The dog in the photo was continually going to the water, which was rushing by, but sensibly decided that it wasn't the day for a dip. 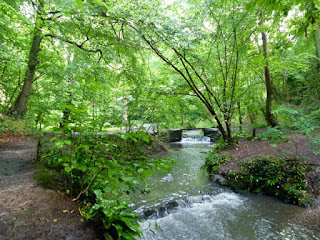 Although you can't see it in the photo, the rushing water is almost black, presumably washing through dirt from the road but also perhaps from drain overflow. Sometimes domestic plumbing is not connected correctly, a danger of DIY, and grey water is drained into the rain water system.  The river did have a 'grey-water' smell about it. Fortunately when I returned to the same spot 45 minutes later the water was much cleaner and the smell had largely dissipated.
This might be one of the reasons that several species of riverfly larvae are missing from our monthly surveys. 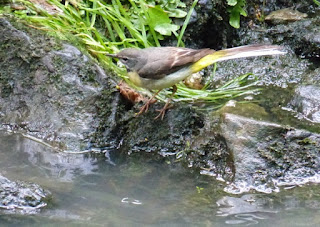 As I was walking back, up towards Lakewood Road I was surprised and relieved to see that this Grey Wagtail hadn't been put off its food by the grey water. It was plucking items from the water's edge. Perhaps it was compelled by the need to feed young. Fortunately they are very adept at darting up and catching insects in flight. This behaviour is frequently seen along the stream and is a delight to watch  see here. 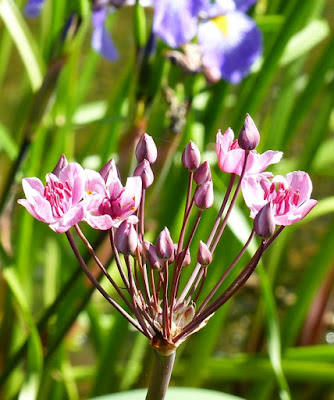 The rain will add life to the pond as well, unaffected by pollution from roads but prone to drought. There's enough water to support some plant life and there are some Flowering Rush which look very pretty at the moment. This photo was taken during this week. They seem quite sturdy but the heavy rain will have damaged the irises. 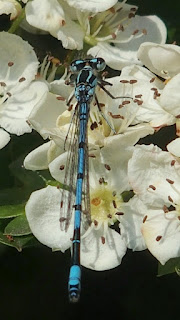 There are also damselflies around the pond which you might see mating at this time of year. This is  a photo of one taken by Liz Snook on the day of the Bugs & Butterfly walk in May. Damselflies have a complicated and seemingly bizarre method of mating during which the male holds the female by the neck and the male then also curls around making a heart shape. 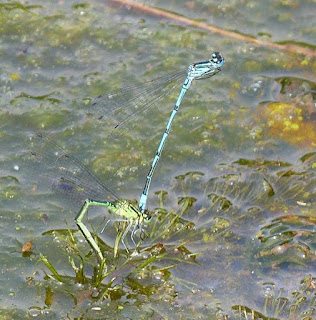 By the time I took this photo the pair had probably already mated and the female is seen laying eggs on the pond vegetation while the male keeps a firm hold. You can read more about this amazing dance here . You can also watch an interesting video of the damselfly lifecycle here and/or of course see see it actually happening yourself at the pond.


Because of the problems of the pond drying during drought there is thought being given to converting it to a bog area. This will bring a change to the species that inhabit this small area and whereas some species might flourish better in a bog than in a pond, others might decline or disappear. There will be some research and discussion before a decision is taken but if you want to keep up with events watch the Friends of Badock's Wood website; particularly notes from the general Meetings. Even better , come to the meetings and have your say.- FOBW minutes. 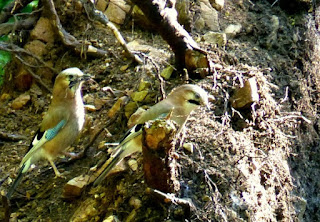 These jays were climbing over the  fallen chestnut tree which has the carved spider on it and seemed to be collecting nesting material. During the winter they will have fed largely on stored acorns but at this time of year will also be taking eggs and young chicks from nests in order to feed their own families.
They are members of the crow family but much less numerous and harder to see than their cousins the crows, jackdaws and magpies. You might however hear its screaming call - listen here. 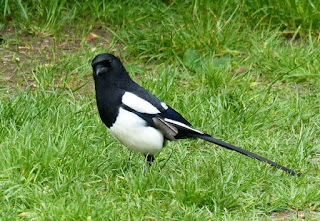 There are plenty of magpies in the wood; this one was in the meadow. In some areas of the UK they are considered a pest and there are legal methods of control. During the summer they feed on beetles and other invertebrates as well as fruit but they will takes eggs and chicks at this time of year. However, reports suggest that they do not seem to affect the populations of songbirds. Last week I saw one pecking at something in the meadow. When it left I went to see and there was a 20 pence piece trodden into the grass. This runs contrary to evidence that magpies do not take shiny objects for their nests-see study. 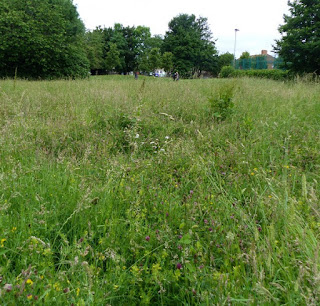 The meadow plants have grown remarkably over the last few weeks. The variety of grasses and flowering plants are an important habitat for many types of insects which will in turn be a food source for the birds. Hopefully we will get some more hot days to allow butterflies to fly and flourish. 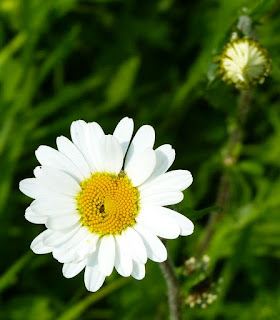 It is imperative that the meadows are not damaged. Naturally dogs will run through it and perhaps the damage is minimal but I have seen adults wading through the meadow which clearly damages the plants and last week a family spread a blanket, lay their bicycles down and flattened a significant area for a picnic. This is almost certainly because of a misunderstanding of the purpose of the meadow. I am not sure what protection Badock's Wood gets from being a Local Nature Reserve but perhaps education and better signage are part of the answer. 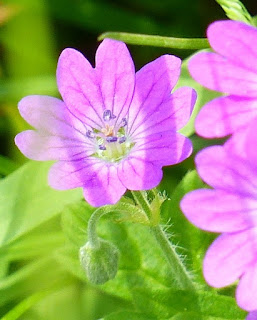 You might be interested to hear this song written about a visit to Badock's Wood in 2004. It's not clear when the video was filmed but at least prior to 2007:  Drakes' Echo. Thank you to Dino Dini.  I don't remember hearing of Dino Dini previously but if you would like to know more about him see here.

There are three events taking place in Badock's Wood during July:
See FOBW website for more details of these events.