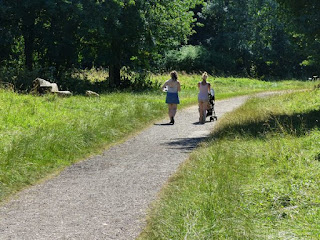 Midsummer is a relatively quiet time in Badock's Wood and particularly during those few days when the weather is uncharacteristically hot.
The birds are much quieter and less visible after the busy periods of nest building and rearing of chicks. They all seem to be taking a much deserved rest.
Of course it might just be that they are busy earlier in the morning when it's cooler and before most of us have ventured out. 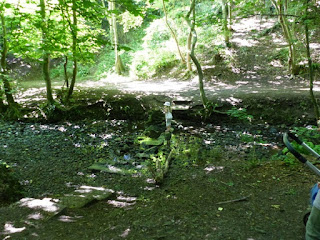 It was almost too hot walking through the meadows when I went to the wood a couple of weeks ago. Although there was little water it was refreshingly cool to be in the shade of the trees by the river. The stepping stones are tempting for most children and this little girl did very well until she reached this point and then needed to be rescued by her mum.

We were fortunate to have good weather for the Midsummer Wildflower Walk too and here you can see the leader, Tony Smith telling the group about Crow Garlic. It is quite plentiful in the meadows and is a different plant from the wild garlic which is much more abundant and generally found on the banks and amongst the trees of the wood. With Crow Garlic the 'flower head' is in fact a bunch of bulbils and each bulbil can fall to the ground and grow into a new plant. Often you will see the bulbils sprouting while still in the 'flower head'. 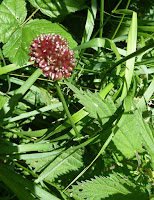 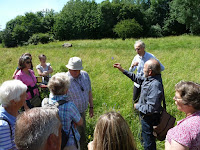 Above you can see the group checking for the garlic smell and if you see one in the meadow (see photo left) it is worth running your hands over it so that you can smell it for yourself. For a better explanation of this plant click here.
On the right is Tony West, FOBW Chairman, showing and talking about a Wild Mallow flower. 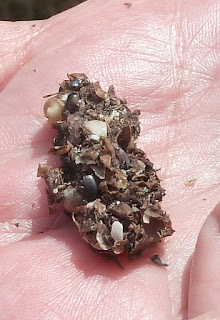 During the walk, Roger Moses found a bird pellet. Most people know about owl pellets but do not know that many birds regurgitate the indigestible parts of their food in pellet form. With owls it would be primarily bones and feathers from small mammals and birds. Roger thought that this pellet was most likely from a crow because it contains the shells of small snails but also possibly beetle cases. He is hoping to be able to show owl pellets at an FOBW meeting and perhaps take one apart to see what the owl has been eating. Watch the FOBW website or notices for more information.
There are several websites with information about bird pellets and although this one is American it has relevant information  about what crows eat and their pellets - see here.
Roger is a member of the Hawk and Owl Trust, a charity which is going to install  two owl boxes in Badock's Wood in the near future. They are very important contributors to hawk & owl conservation - Hawk & Owl Trust Website. 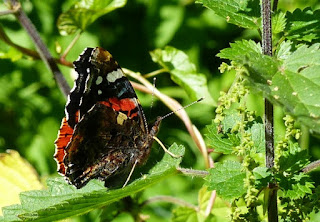 There have been surprisingly few butterflies in the meadow this year. For some species this might be because of the cold , wet start to the summer but for others it might be due to the long journey of migration and the dangers en route. For instance, many of the Red Admirals seen here have made the journey from North Africa and Continental Europe. Weather conditions en route can make a large difference to the numbers arriving but we might continue to see them until about October.This butterfly seen by the stream has its wings closed but for more photos see the following website: Red Admiral. 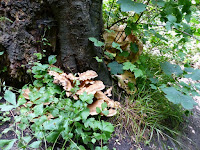 The second half of July proved to very hot, including a mini heat wave. However, August is beginning with a damp period but this is a good time to start looking out for fungi. These two bracket fungi were seen over the last week or so. One at the base of a dead tree near the Westbury Wildlife Centre and the other on a dead fallen trunk on the opposite side of the stream from the bamboo at the Triangle.
They are large and quite dramatic but they are an important mechanism for breaking down dead trees and also a major source of food for insects and invertebrates.
Although leaving fallen branches and dead trees in the wood might seem like neglect they are an important habitat for all sorts of wildlife. You can often see crows or other birds pecking at the soft rotting wood to hunt for and to prise out all sorts of tasty morsels.
The value of dead wood.

When I was walking by the Triangle the other day I thought it was beginning to rain. In fact it was the sound of many beech nuts falling through the leaves on the trees and then to the ground. The floor was covered with them to the extent that it made a very pleasant crunching sound as I walked over them. It might be that squirrels were feeding in the trees and this was causing the fall but the nuts are ripe and a slight breeze would cause it. 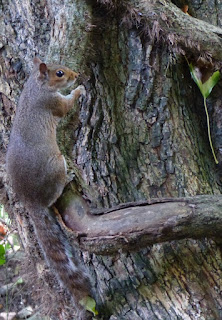 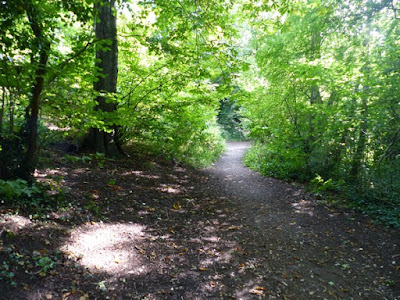 Have a Good Summer !!