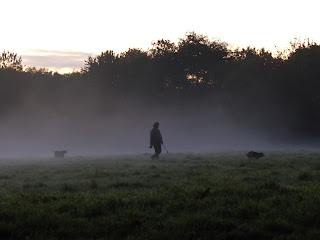 This last week has seen a sudden drop in temperature. It has been quite chilly first thing in the morning and there has been mention of frost. Certainly it has been misty in the meadow and many birds are deciding not to break cover until later when it warms a little.
This affects our fortnightly bird surveys, which we normally start at 7 or 7.30am, but at this time of year it is not easy to see them and we need to rely on identification from their calls. They are not so vocal in autumn & winter but also our call identification skills need some practice. 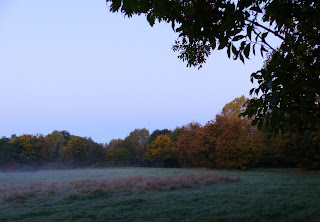 There are some lovely autumn shades coming into trees around the meadow. As the leaves fall there is a carpet of leaves under the trees and I still enjoy walking through the dry leaves, listening to the rustling sound they make. They also offer protection from frost and predators to small mammals. 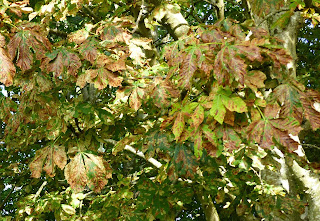 However, the horse chestnut trees have a problem. You might have noticed that the leaves have changed colour but they are curled at the edges and they are a dull brown rather than the warmer colours that we have been used to. The discolouration can start in June. The problem can be caused by either a fungus or a moth both of which can severely affect the leaf without causing serious damage to the tree itself.  The caterpillars of the moth, called a leaf miner, tunnels into the leaf and feeds on it. The fungus was first reported 80 years ago but the moth arrived from Europe in 2002. To learn more click here. 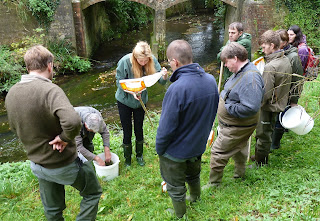 The River Trym is a major feature of Badock's Wood and it is important that we look after it. Because the wood is in an urban setting it is vulnerable to pollution from chemicals that are poured into road drains and from other drainage systems when there is a blockage or heavier than usual rainfall. There is a delicate balance amongst the wildlife from micro organisms to the larger birds and animals. There are many ways that one species is important to another but a major one is as a food source. Many birds need to feed on insects and the grey wagtails and dippers in particular will need to feed on water creatures. If there is pollution which kills these water creatures then the birds are in danger. Of course the pollution itself might kill the birds if they drink it. Sometimes paints, solvents, oils or soapy water (from car washing) flows from drains into the river and will have serious effects. I and another member of FOBW have recently had training by Bristol Avon River Trust in examining the river for water creatures. This will be done monthly and if a drop in the number of certain fly larvae is noticed then the Environment Agency will investigate and attempt to find the cause and source of the pollution. This photo, taken last week, shows Harriet Alvis of BART showing us what to look for in a sample taken from the River Marden in Calne, Wiltshire. To see how BART helps maintain the quality of our rivers click here.

There aren't many flowers left in the meadow now but there are still some to be seen. I took these photos on Saturday morning (17th Oct). During the summer I went on a flower walk led by Tony Smith of Bristol Naturalists and he very ably named the many flowers that we saw. Unfortunately I can't remember the names of some of them but there is clover, buttercup, convolvulus and ivy amongst these. There is a lot of ivy in Badock's Wood and it is a very important source of bird food in mid to late winter. You can see that it is in flower now (bottom flower on the left) and later it will form black berries which will be ripe when many of the other berries will have already been eaten and food for birds and small mammals will be in short supply.

To find out more about the Bristol Naturalists' Society, what they do by way of education and also to monitor and to conserve our environment click here.

Redwings have already started to arrive from Northern Europe. Through the winter they will be seen around Bristol, often with Fieldfares, feeding in flocks on Rowan and other berries. As the winter progresses this food source will gradually be used up and the ivy berries will be important for these birds as well as other berry eating birds such as blackbirds and robins. Although These birds can also eat insects and worms, there won't be many available in the winter. The Redwings and Fieldfares will return to Northern Europe in March and April.

Both birds are types of thrush. The redwing with the red under the wing and the fieldfare with the distinctive grey around the head and tail. You might see them in the trees of the meadow. These photos are from the RSPB website. For more information on these and other birds  click here. 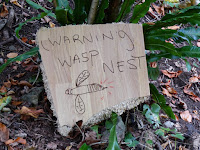 This warning has appeared over the last few days and can be seen on the Triangle. Wasps of course are a natural part of the wildlife of the wood but also can be major inconvenience. I took this photo of the nest early on Saturday morning and the wasps didn't cause me any problem at all. I could get very close and they didn't take any notice of me. They didn't see me as a threat. Unfortunately I didn't take a photo of the sign at the same time. I went back with my wife later in the afternoon to take this photo of the sign and the wasps had clearly been upset through the day and one got into my wife's hair and stung her on the head as we tried to remove it. She was several metres from the nest. Fortunately not a serious problem and antihistamine cream relieved the discomfort. I had one in my hair but it came out without stinging. I don't know what will be done to reduce the danger. It seems  a shame to destroy the nest but it is beside one of the major paths in the wood and children are certainly at risk. I expect it will be the Council's decision and they will have to consider the risks to people which include the possibility of anaphylactic shock. In the meantime make a detour when you see the sign.  I'll copy a paragraph about the life history of wasps from a website and paste it below....................

"At the end of the summer, the wasp colony takes on a different function. The queen now starts to lay 'different' eggs. These will eventually emerge as males (drones) and new young queens. The activity becomes 'very active' and the workers are super protective about their nest.
The young queens mate with several drones to become fertilized for the following year.
Eventually the whole colony dies off apart from the new queens who like the queens before them, find a suitable place to hibernate for the winter." 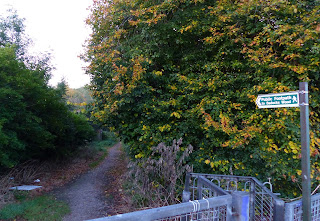 This is an entrance into Badock's Wood from Doncaster Road. Perhaps not as well known as the main Doncaster Road entrance but the trees here can be very colourful. The lane is about a hundred or so metres long before it opens out into the wood beside the Trym. One side of the lane has houses and the other side has a fenced off wooded area which is inaccessible from Badock's Wood.


Enjoy your walks in the wood but watch out for the wasps !!


If you have any comments please send them to me at: badockswood@virginmedia.com .

If you would like notification of future posts enter your email address in the box at the top right of page.