It was a misty morning on Sunday 4th Oct. A perfect start to the day. The sun was giving warmth and clearing away the mist. Several walkers were enjoying what many believe is the best part of the day; and Sunday is a day to relax.

However, it wasn't the same in post-war Bristol. During the Second World War nearly 82,000 Bristol homes were completely destroyed by enemy bombing and nearly 1300 Bristolians were killed and many severely injured. Because of this the council temporarily broke Sir Stanley Badock's covenant forbidding building in the wood and allowed the erection of 81 prefabs in May 1947 on the meadow. The road leading to the new settlement was called Bowness Gardens and the prefabs were removed between 1979 and 1982. Some evidence of the buildings still remain in the form of concrete bases and paths. For more information and a photo click here.

I have fond memories from a childhood in Devon of looking for field mushrooms with my brothers and cousins. Early on chilly autumn mornings we would go collecting and then have a delicious breakfast of cooked mushrooms.

However, there are many different shapes and sizes of fungi and several of these can be found in the wood. 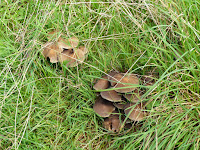 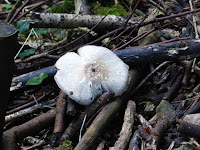 I don't know the names of them but I do find them fascinating and these photos have been taken recently as I walked around the wood. They have their individual preferences for live trees, leaf mould or decaying wood. Often they are not immediately noticeable so peer into the undergrowth or around a dead tree trunk and see what you can find. I have no idea which ones are edible and which ones are not and so I would not even think about eating any of them. 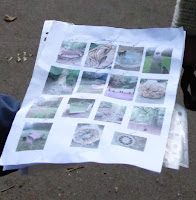 Sunday morning I also met a lady who was walking with her friends. She had prepared a Nature Trail for them and they were walking around Badock's Wood looking for the landmarks in the photos that she had printed off for them. The children were having a great time.
Not an original idea of course but it was the fact that she had  actually done it that impressed me. Well done !!  I took a photo of her trail sheet and there is one picture on it that I can't place so I will have to have a search around the wood for it myself. 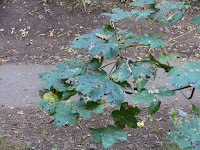 The black spots on these sycamore or maple leaves are also caused by a fungus. You will find many examples of this through the wood. They are called 'tar spots' and look unsightly but don't cause the tree any substantial harm. The spots gradually increase in size and intensity through the summer but the leaf has already done its work of supplying the tree with food by photosynthesis using carbon dioxide and sunlight. Soon the tree will cut off its connection to the leaves and they will fall as they do every autumn.

This oak apple is feeding a wasp larva. The wasp lays an egg in a leaf bud, this causes irritation and forms a swelling, the gall, with the larva inside. When the larva hatches from the egg it feeds on the inside of the oak apple and develops into an adult wasp.
There are several types of gall wasp and some will lay an egg in an acorn to produce a distorted fruit. You will then see a very peculiar acorn which cannot develop into a plant. 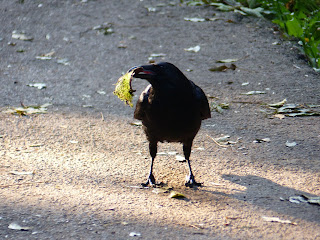 I had just passed the carved bench, towards Lakewood Road when I noticed this crow working very hard at getting something out or off of this piece of bark. Whether it was insects or moss that it after I really don't know. It carried the bark from the tree to the path, then back to the tree again before flying off with it. The crow was determined to get as much as it could from the piece of bark. 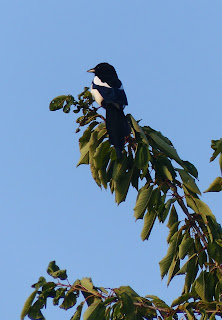 This magpie had a much better idea. It was sitting in the sun at the top of a tree by the sports field and just watching the world go by.....  a perfect Sunday !!

If you would like notification of new posts to this blog put your email address in the box at the top of the page.


Comments can be sent to: badockswood@virginmedia.com

mike townsend
Posted by mike at 08:18