Wings and the Web 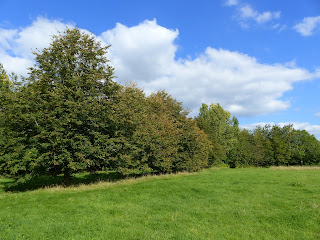 I enjoyed the tree-walk at the Celebration Day last Sunday. I thought that elm trees had been wiped out by Dutch elm disease but we were told that there is elm present in the woods.  There are no mature trees but the old roots have survived and send up suckers to form new saplings. There is a cycle of the old roots sending up suckers, after several years these succumb to the disease and die but then new suckers come up. We were told that the disease appears to be getting less virulent and hopefully eventually will be weakened enough for the suckers to survive and produce new healthy mature trees. 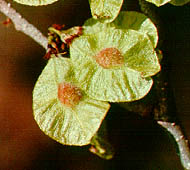 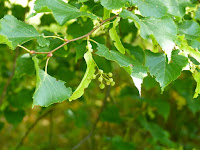 The seed on the left is the elm, it has a wing encircling it. This photo is from the internet, the others are from Badock's Wood. The one on
the right is sycamore which children love to throw in the air as helicopters when they are brown and dry. It's interesting that the sycamore seeds are sparse in Badock's this year but the ash keys (below left) are very abundant as you can see. Last year the situation was reversed and apparently no one knows why this happens. Lime keys on the right. When you see these do not park under the tree because the tree drips a very sticky sap that will make a mess of your car.
The variously shaped wings are devices for catching the wind and they spread the seeds as far as possible from the parent tree to give the maximum chance of a new tree growing to maturity. 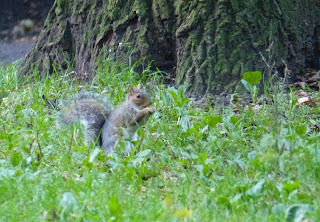 Last Sunday, 20th September, I was watching this squirrel searching for and eating acorns under the large oak trees at the Triangle. It was having quite a feast but it suddenly disappeared up the tree. Quite sensibly because when I looked to see what had happened there was a large fox standing close to where the squirrel had been. 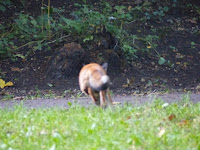 Its eyes were fixed on me but by the time I'd pointed the camera it was well on its way and The lower photo was the result; just a bushy tail and a rear end. It was a good looking animal and almost certainly a dog fox because of its size.

There are all sorts of creatures in the wood. We found this caterpillar on a trunk during the tree walk last week. It is from the lime hawk moth which flies in may & June. It feeds on lime but also on other deciduous trees too. I'm embarrassed to say that it reminded me of a unicorn but I later discovered that the horn is on the rear end. The caterpillar is green at first but becomes brownish like this as they prepare to pupate for the winter.  It was about 6 or 7 cms long. I shall be looking out for hawk moths next year.

Spiders often get a bad press so I've put this one in because he seemed quite a handsome fellow. Its body is about 2 cms long. He was busy building his web to catch unsuspecting flies and moths. I am told that he is a common garden spider. If you enlarge the photo by clicking on it you will see that the legs are very spiny, presumably to assist in gripping its trapped prey or in climbing over the web. Most spiders have 3 sets of spinnerets to produce the web and these produce different types of silk.  Some sticky and some fluffy to capture prey and also a single thread silk for the spider to hang from. 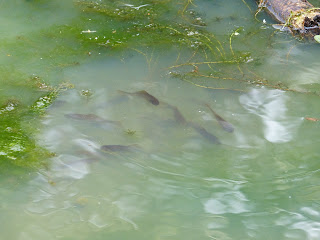 I saw a heron at the pond a few weeks ago and I wondered if it had found a sizable fish for its meal. I thought that perhaps someone had put in a carp that had outgrown the owner's pond. However, I was surprised to find a small shoal of fish in the pond this afternoon. You can see that there are about a dozen and they are about 7 cms long. They soon vanished into the murky water, probably thinking I was a predator so I would think that a heron would have difficulty to catch any more than one fish at each visit. I don't know what type they are. 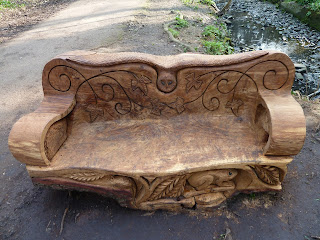 The Willow Bank Bench (left), another of Andy O'Neill's sculptures, was officially opened by the Lord Mayor in March 2015. It shows Hidden Green Treasures within the wood and has a magnificent owl with spread wings across the top of the back. It is worth a visit to see the other animals and wildlife that have been sculpted into the sides of the bench and under the arm rests. Of course the bench has weathered since March and its wood is now much darker. 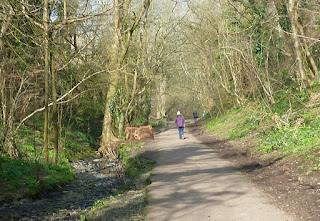 The bench is conveniently placed between the Triangle and the Lakewood Road entrance where the Willow Bank sheltered housing is situated. It gives a good view along the path and the stream. You can just make it out in the centre of this photo.
If you would like to receive notification of each update to this blog, please put your email address in the box at the top right.
You can enlarge the photos by clicking on them.