The Good, The Bad & The Ugly 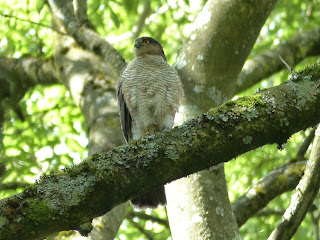 There's a lot of 'Good' in Badock's Wood. Of course it depends on your perspective.  We were pleased to see this sparrowhawk in July. It had a clear view right down the path from the bench at the Lakewood Road entrance to the Triangle. However, not 'good' for any sparrows, bluetits or other small birds. In fact the pair of birds nested and raised at least two young this year and these would have been fed mainly on the small birds of the wood. You might have heard the hawks' high pitched cry as they fly over or between the trees hunting for their food.

Why is this squirrel hanging on by its tail and hind feet to eat berries? Is it just showing off? Surely there are enough berries for it to be able to sit on a branch somewhere and sit comfortably. Mind you, it was a very pleasant morning, just right for hanging around the meadow in the sun.
Grey squirrels have been here since the 18th century and although perhaps we now enjoy seeing them, they have ousted our native Red squirrels from most of the mainland. It would be unfair to blame them for displacing our reds but it is a warning about the introduction of new species, whether it be mammals, birds or plants. In fact, only last year the law was revoked which made it an offence not to inform the authorities if you saw a grey squirrel. The squirrel would then have been 'disposed' of.   See: Grey Squirrel -the law

This one has more sense. He's found a nut (or is it an acorn?) and is going to take it somewhere quiet to eat in peace and comfort. He was down by the Trym and had no intention of sharing his nut with me ! I wonder how many grey squirrels are in the wood? The last few days I could hear or see them almost continually. I watched one bury something interesting near the hedge in the playing field. I didn't find out what it was but I'm sure the squirrel will return to look for it when food is more scarce.... and it will be during the winter. 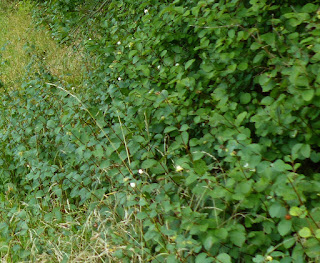 I've always liked Snowberries (see left). They conjure up images of winter and snow. But I was amazed to learn that they are on a  'Bad' list for removal from the woods. It was introduced to the country in the 19th century and  it spreads to eliminate other species from an area. The berries are poisonous but because white berries are not attractive to eat and because they rapidly cause vomiting there are few cases of serious poisoning reported. I shall look at snowberry differently in future.
Another species on the 'Bad' list is Holm Oak. It doesn't have a typical 'oak' shaped leaf but it does have acorns and when I find it I will put in a photo so that we can all identify it. 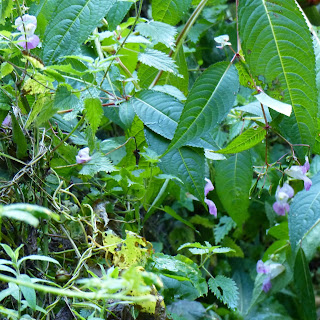 Also on the list are Cotoneaster and Wilson's Honeysuckle, both of which I have yet to research.
I expect we all know about Himalayan Balsam. I spent an hour or so with a colleague from FOBW recently removing several plants from the stream near the Doncaster Road end. It was necessary to put a bag over the seed head because it 'explodes' and sends the seed up to 22 feet. I could hear them firing off inside the bag. A pretty flower but again it reproduces vigorously and stops other plants growing.  Ideally we would have removed the flowers before it seeded but that's a thought for next year.

There are still some butterflies around. It was sunny first thing this morning (13th Sept) and there were several Speckled Woods about. This one was enjoying the brief period of sun and took full advantage. It must have known it wasn't going to last long. and within half an hour it was cloudy and dismal again. Butterflies need warmth to fly and are deterred by wind. 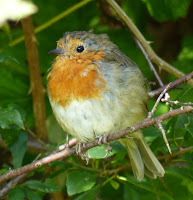 I want to put this photo in  because I felt a bit sorry for the robin this morning. I don't know why he (or she) is so bedraggled. It might have just had a bath or had a rough summer. Perhaps it's had a late brood and is still recovering from the stress of feeding its young. Many birds are moulting and gradually changing to their winter plumage so that might be the answer. Some birds are very nervous during their moult and tend to hide but this one didn't seem nervous at all. It seemed to enjoy the attention until an inquisitive dog came along and the bird decided to seek shelter. I saw a robin in a similar condition yesterday in a different part of the meadow.

And the Ugly. Well, this is the pond as it was this morning. Unfortunately litter attracts litter. I'm not sure that this needs any comment but hopefully we'll be able to do something about it before the weekend.
The Friends of Badock's Wood have worked wonders in the wood and continue to work to preserve its beauty and its wildlife for the pleasure of everyone. However, there is always more to do.

see Friends of Badock's Wood - events
Till next time......


Comments can be sent to: badockswood@virginmedia.com