A little History and a Warning

I saw in a leaflet that Badock's Wood is about 10 hectares. I'm afraid this didn't mean much at all to me. A hectare could have been the size of a tennis court or a football pitch. I'd no idea. I now know that 10 hectares is 0.1 square kilometer which sounds very little but is equal to 25 acres which does sound more respectable. So you can choose either 10 hectares or 25 acres ( about 15 football pitches !!).


A bit of History 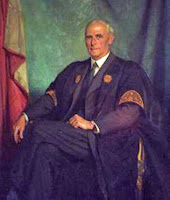 Sir Stanley Badock gave half of the woods to the City nearly 80 years ago in 1937. He gave it on condition that the City gave the other half, which they did. There were two other interesting conditions to the gift. The council was to maintain an un-climbable iron fence along the western boundary of the land. Also, no structures could be erected except to protect the lands. It was a marvellous and generous gift to us, so a big "Thank you" to Stanley. Let's remember the man as well as the name and look after our woods.
There's a  lot more to know about him and the history of the woods so I'll put in a link:  FOBW history .
... And there's plenty more if you search on Google.

There are still a few butterflies around on warm, still days but the there are far fewer than there were in August. The numbers were reduced greatly when the meadows were prematurely cut by the council. There were still flowers in the meadows for the butterflies and insects and these were removed. This reduced the numbers of butterflies and other insects and then this reduces the food for birds and bats. One bad decision can have a chain reaction which affects many species... and also bad for those of us who enjoy watching these beautiful creatures. Fortunately I took a few photos of the butterflies in the meadow during the summer and I can put some here for you.

These two are skippers.  There are several types and some are mottled but these are 'small skippers'. Delicately perched and their large complex eyes make them look nervous. They have many relatively simple 'light receptors' grouped into two eyes, one either side of the head to give a fairly comprehensive field of vision.  If you're interested in their anatomy see: butterfly anatomy. 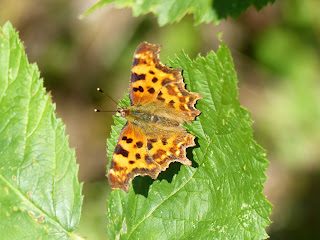 This butterfly is well know and of course is a comma. There were several of these in the meadow and around the blackberry flowers but I didn't see many peacock or red admiral butterflies this year. 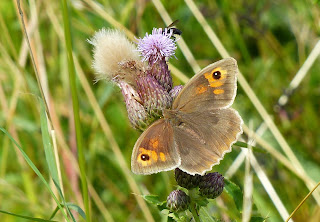 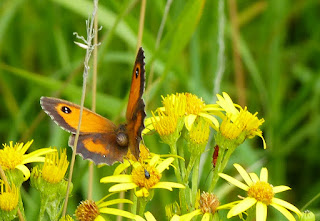 Before this summer I had not knowingly seen a gatekeeper. I could already recognise a peacock, comma, red admiral and small tortoiseshell but there are so many more and it adds to the pleasure if you can put a name to the different ones.. 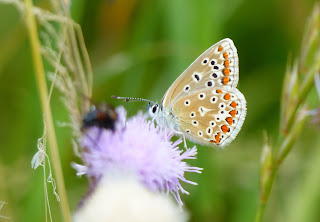 I've put in the photo on the left because I found it hard to believe that this butterfly with folded wings is a common blue, but it is (see my last post). If you get chance to see one, they are quite small (app 3cm wingspan) then be patient and see if you can spot it land and fold its wings. It's worth the wait. I took this photo on the same day as the open-wing one but this is possibly a different specimen. 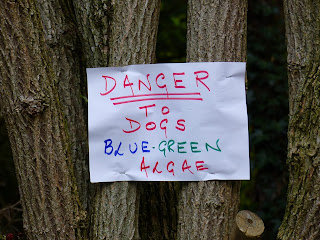 It seems that there is Blue-Green Algae in the stream where it has pooled. Someone has put up a sign to warn dog-walkers because it poses a health risk to animals and humans. The algae can be found in almost all waterways under normal conditions but it is when it reproduces to such a dramatic level that it can become dangerous.
You can see the water colour  in the lower photo although here the colour is slightly enhanced by reflection from the foliage. The advice is to keep dogs and children out of the water until it is clear. Fortunately we had some rain overnight which will dilute the effect a little but even so caution is needed. 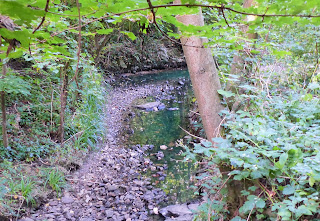 Here is a link to a pdf text about the algae.
Environment Agency - Blue green algae. 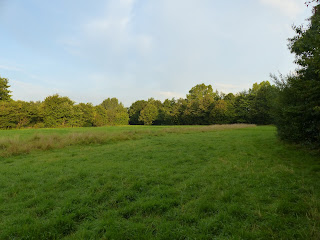 An early morning view of the meadow yesterday, 11th Sept. Perhaps you can see the signs that the trees are beginning to change to their autumn colours.
Don't forget Badock's Wood Green Hidden Treasures Celebration on Sunday 20th Sept and the Bat walk on Friday 18th Sept. www.fobw.org.uk.