It's THAT Time of year again !! 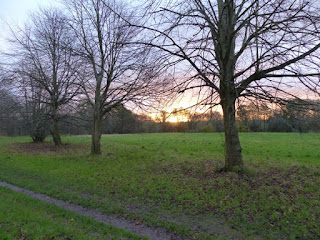 One of the pleasures of a walk in the wood is that most people are quite friendly. Not all, but most will at least give some sort of greeting. For some it is quite a social event and they will meet friends and neighbours; perhaps it will be the only person they will speak to that day.
In fact it's a bit like belonging to a club and you can 'join in' as much or as little as you want. You soon get to know the characters. 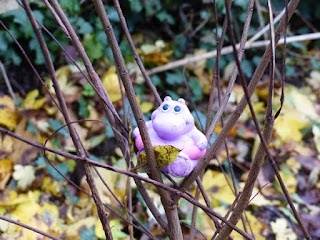 However, I'm just as interested in some of the other characters I come across. I met this fellow in November and he seemed quite lost but not at all concerned. He was only around for a few days so either he was just passing through or somebody had come to collect him. Hopefully he is now somewhere warm because he was beginning to turn a bit pink with the cold (Hippos don't turn blue as we do !!). 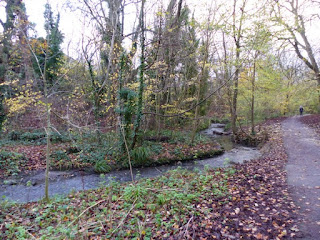 At some times during the summer this part of the Trym can seem very dry and barren (see 'Swallet' below) but one of the consolations of wet weather is that it brings the river to life. Not only as seen in the photo but if you are there you can sense the movement and sound of the water rippling over the stones and rocks. It's worth getting a bit damp to be out there and to be part of it. 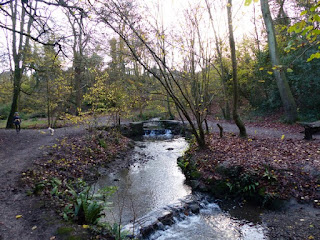 The colours are wonderful too. It's a different atmosphere than that created by the bright greens of Spring and Summer or the browns and golds of Autumn, which are beautiful but can sometimes be quite intense. This is a more subtle colouring, often with less sunlight and perhaps easier on the eye. A friend, Heather, mentioned the special sunlight that  falls on the different yellows that you sometimes see at this time of year.
It has to be seen to be fully appreciated. 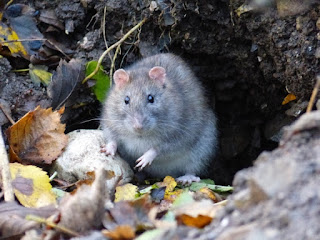 I met this fellow on Saturday (5th Dec). He seemed a friendly little chap and reminds my brother of Ratty, waiting for Badger & Moley from 'Wind in the Willows'. He waited patiently at Badger's Doorway for several minutes before dodging back inside to rest there in safety. I'm sure he had something to say to me but he couldn't remember what it was.
It's a reminder to wash your hands or use a hand cleanser if you handle litter or if you put your hands in the stream.  This is important because although rats have become a natural part of our woods they can carry organisms which cause Weil's disease. Another reason for good hand hygiene is because it is possible to contract disease from dog droppings if the dogs are not treated for worms regularly. Fortunately many are.

Holly of course is very seasonal. There is a lot of holly in Badock's Wood, particularly in the area between the Triangle and the Westbury Wildlife Park and also either side of the path that leads up to the sports field from the Triangle. However, there aren't many berries. At least not yet. I don't know whether this is generally a poor year for Holly berries but they are sparse in Badock's Wood. I am also told by my French friend, Gilbert, that they are also sparse in the Bordeaux area this year... hopefully the wine grapes have had a good year !!
Unlike the Alder tree which we looked at last time, the Holly has separate male and female plants. Around the wood at the moment you can see plenty of male plants that are carrying flowers which produce the pollen. So the pollen needs to get to the flowers on the female plant to fertilise them and produce berries with viable seed.

The pollen is normally carried by insects such as bees and possibly wasps. The more insects there are and the closer the plants are together, the more likely that fertilisation will take place. Unfortunately the wasps decided to nest close to the path at the Triangle and were eliminated for safety reasons. Another cause of reduced insect activity might be the cold and damp weather that we have been having recently.
You can see white female flowers above the red berries  and white flowers on the male plant. Both of these plants are in the wood and there are plenty of flowers around at the moment. The female holly can produce berries without being fertilised but those seeds won't grow.
Holly is a very good sanctuary for small birds because although they can easily navigate the prickly leaves, larger predators such as sparrowhawks and foxes will not have such an easy time and the smaller birds are fairly safe. Fortunately for the birds it's also evergreen.

The young leaves of the Holm Oak do not resemble typical oak leaves. In fact they could easily be mistaken for holly leaves. This shrub is in the hedge to the left as you enter the sports field coming from the Triangle. I have found 4 bushes along that hedge but haven't yet found any acorns. Holm oak does have acorns and I saw some on a bush in Devon a couple of months ago. I hope to see them on one of our bushes next year.
Unfortunately it is not a native and probably will be eventually removed.  The first acorns were brought over from the Mediterranean in the 16th century and trees from the original acorns are still standing in Mamhead, Devon. To read more  click here.
The shrub is named for its similarity to Holly because Holm is an old English word meaning Holly. 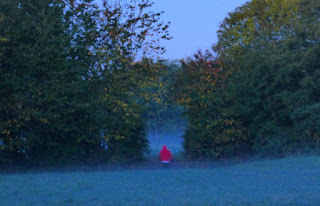 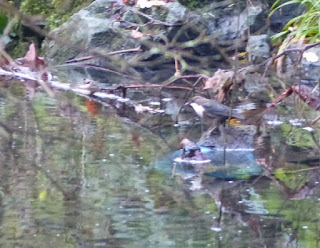 I'm not sure what this character was doing in the woods early one morning. I could hear bells tinkling and the sound of restless hooves pawing at the ground but he didn't seem to be carrying the sack of presents that I would have expected. However, this was in November so it was probably just a practice run.

As I said, you meet all sorts of characters in the wood.


I wanted to finish with the photo on the right because it's the photo of an interesting bird. It's clearly a poor photo, taken in subdued light but the Dipper is a bird that we don't  often see in the wood. It needs fast flowing water and feeds on fly larvae and fresh water shrimps, usually where the water flows over rocks or a waterfall. There are a lot of fresh water shrimps in this part of the Trym but the availability of other fly larvae is poor because of the water quality. I am always amazed at the way the Dipper can step into fast flowing water and walk on the bottom of the river feeding.
If you see it, you will notice that it is continually bobbing up and down as it stands on a rock or the river's edge. This photo was taken in November from the bridge beside the Westbury Wildlife Park. The bird was in the Park. It occasionally comes into the wood but is not often seen. To learn more about the Dipper click here and to see some interesting BBC video of this fascinating bird click here. 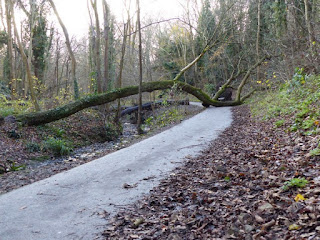 STOP PRESS :
Another large tree has fallen in the wood. This time it's an ash and you can see that it's close to the previously fallen and carved Chestnut tree. I'm sure the council will be quick to cut out a section so that we can pass without having to negotiate the obstacle course.
Oh, and thank you to the Parks Dept for clearing the leaves from the paths a couple of weeks ago. 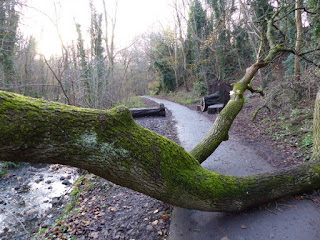 Notes:
A Swallet or Sink is a fault in the floor of the River which allows water to sink below ground level. There is a very brief reference to the one in Badock's Wood appearing just prior to 2013. See  Badock's Wood Sink.
To learn more about Swallets or Sinks generally, read about Sidcot Swallet.


You can enlarge photos by clicking on them.

It's short notice but some of us will be doing a Litter Pick, meeting at the Doncaster Road  entrance, at 2.15pm on Friday 11th December (tomorrow, as I write this). Join us if you can. Equipment provided.

The Friends of Badock's Wood will hold a Tree Dressing event on Sunday December 13th at 2pm.To read more about it look at notices around the wood or visit the FOBW website here.

If you would like to be informed of future posts to this blog put your email address in the box at the top right of the page.

And... in case this is the last edition before it, I wish you all a Very Happy & Peaceful Christmas !!