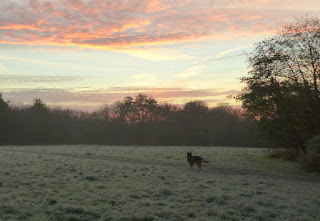 It was cold and frosty in the wood on Monday 23rd Nov. But it was worth getting up and out early to see the sunrise over the meadow and trees. 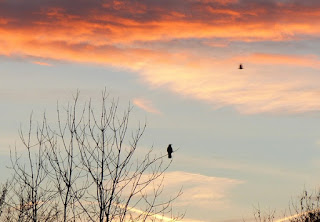 In some respects it's easier to see birds at this time of year. Because the days are very cold the birds have a higher food requirement and because the days are shorter they have fewer daylight hours to find that food. Their focus is on survival. 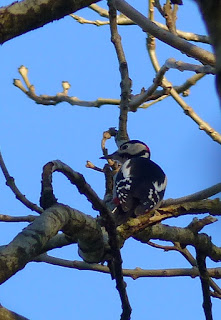 The day before, I was walking with my wife and we saw a pair of Great Spotted Woodpeckers in the trees by the Willowbank bench. They might have been males negotiating over territory or they could have been a male and female deciding if they would make a good couple. I managed to take a photo of one of them. The red patch on the back of the neck shows that it is a male but both sexes have the red under the tail. They don't normally start drumming until about January and then go on until  early summer. You might hear them sooner because they also have a high pitch short call, but for drumming and an interesting piece of RSPB video click here.
You might notice in the video that the young bird has a red patch on the forehead. This disappears with the first year's moult. To hear the call click here, then click on the 'white on brown' play symbol. This web site, xeno-canto, is excellent for all sorts of bird calls from all over the world. It's well worth coming back and playing with it for a while.

During that same walk we saw a pair of treecreepers by the Trym, goldcrests and long-tailed tits and a grey wagtail. Mostly they were too busy to take much notice of us. If you'd like to see pictures of these various birds and hear their calls go to the RSPB website and click on the letters to select the birds. See: RSPB.
I know I put in a photo recently but the goldcrests are so special that I'm adding the bird I saw on Thursday (26th), while I was talking to Graham and Linda.

I have always associated catkins with spring...Hazel catkins looking like lambs' tails. However, as I walk around the woods I see that there are plenty of catkins already and on various types of tree. They aren't ripe yet, in that they aren't 'dusty' and producing pollen. That's just as well because there aren't any female flowers to receive the pollen, it would just blow away in the wind, to no effect. No, the catkins are tight and waiting for Spring.
In the photo of Alder there are green unripe catkins as well as  green fruits. The fruits have come from green flowers, which have been pollinated this Spring and will become woody like cones and release their seeds next Spring. The woody cones that you can see were pollinated last year and released their seed this Spring, perhaps producing more alder but also feeding the birds.
The Hazel catkins beneath it will produce pollen next Spring too and pollinate small red flowers to produce the familiar nuts that are the favourite of squirrels, woodpeckers and humans.
Similar catkins are also found on birch and poplar. 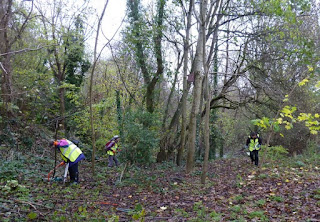 It was a completely different sort of morning yesterday (28th). It was wet, windy and pretty wild, when the intrepid FOBW work party, led by Siân, took up saws and loppers to fell the sycamore saplings along the stream from Willowbank to the Triangle. There were 5 of us and although we got wet we didn't get drenched. However, it was very slippery on the steep slopes and there were a couple of tumbles but generally it went very well and without incident. Unfortunately we left with one fewer pairs of tree loppers than when we arrived, so if you see any on your walks in the wood please retrieve them and contact the Friends of Badock's Wood via their website: FOBW. 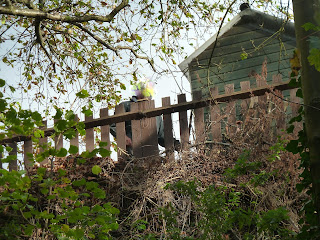 There is a problem with garden waste being thrown over garden fences into the wood and there's a misconception that the rubbish will just decompose and no harm will be done. Unfortunately this is not the case. It prevents the growth of natural plants by smothering them as well as sometimes containing weedkiller or other chemicals. As the pile builds it might fall or be washed down the steep bank and look unsightly and even possibly dangerous.
It's an eye-opener to think that this is no different than driving 10 miles and leaving it in the countryside. It's just easier and quicker and of course it saves having to pay the council to take it away. I'm sure those who do it don't mean any harm but it is harmful just the same.... and illegal. If in any doubt click here. 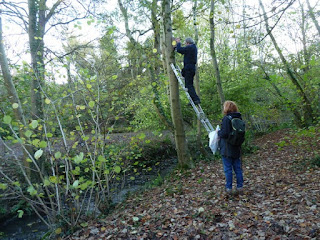 At last the bird boxes are up. It has taken a while to plan and organise but last week the FOBW
installed 20 bird boxes suitable for tits, nuthatches and other small birds. These won't be suitable for robins or wrens who like open-fronted boxes and to be nearer the ground but  accommodation for them will be considered another time.
There were already several boxes around the wood but they are becoming dilapidated although at least a couple were still being used by bluetits this Spring. The photo shows Keith of Specialised Nest Boxes putting a box up by the Triangle. 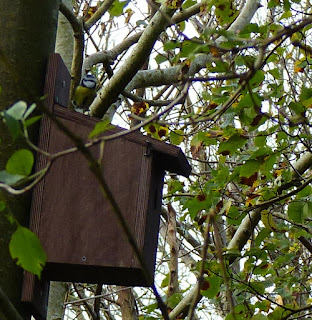 The morning after we put them up I was able to take a photo of a bluetit inspecting the new premises but I think it will find security a problem. The box it was looking at was 32mm and bluetits prefer 25mm so that  larger birds can't get in. We placed several 25 and 28mm as well as the 32mm, so it shouldn't have any problem finding suitable accommodation.
Keith of Specialised Nest Boxes of Charterhouse, Somerset made the bird boxes and he and his wife, Linda, supply several wildlife and conservation groups. If you'd like to know more about them click here.


You can enlarge photos by clicking on them.

The Friends of Badock's Wood Quarterly meeting will take place at the Greenway Centre, Doncaster Road on Tuesday 1st December at 7.30pm. Everyone is welcome to hear what is planned for the wood and will have a chance to voice their opinion.

There will be a Litter Pick on Friday December 11th, 2.15 - 3.30pm. We will meet at the Doncaster Road entrance. Equipment and gloves will be provided but do bring your own if you have them. Please email fobwsecretary@yahoo.co.uk if you plan to take part in the Litter Pick.

Tree Dressing - There will be a Celebration of our Winter Trees on Sunday December 13th at
2 -3.30pm. It will be near the Doncaster Road entrance. See posters around the wood for more information.

Add your email address to the box at top right of page to receive notification of future posts.