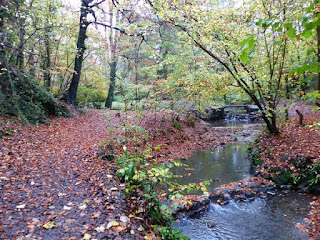 It was wet and drizzly when I went to the wood this morning (5th Nov). Surprisingly, the rain made the colours richer and more interesting. However, I was reminded of snow as it turns to slush. A week or two ago the leaves were crisp and light, fun to kick. Now some have turned to 'slush' and in places are quite slippery underfoot. I'm told that there was a time when the council came to blow the leaves away from the paths but with the cutbacks those times have gone. We could give some thought to volunteers clearing the paths in future years but there are a lot of paths and a lot of leaves!!  If it's done when the leaves are dry they might just blow back but if it's done when the leaves are wet and 'slushy' then the paths might be left more slippery. 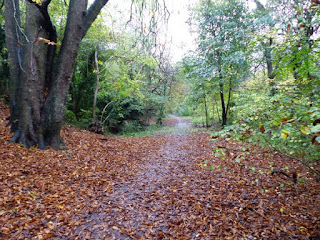 As I walked to the woods the streets seemed quite damp and dreary but in the wood it all changed and although still very damp there was no dreariness, the stream was lively and there was lots of interest all around. It's unfortunate from a wildlife point of view but some will be relieved to know that the wasp nest has been 'treated'. Unfortunately the wasps had become too aggressive and several people had been stung. It was mentioned previously that wasps become very protective of their nest and queen in Autumn and on this occasion it has led to their downfall and the death of their queen. 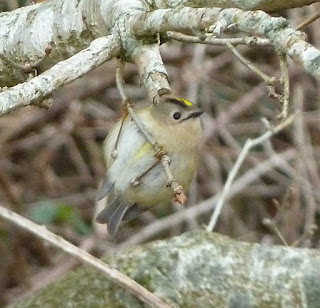 Autumn is a time when many birds move to warmer areas. Some come to us from farther north, perhaps from northern Britain or the north of Europe where it has got much colder. Others feel that it is too cold here and leave us to go south and head for the warmer parts of Europe or Africa. The Goldcrest is one bird that arrives in the UK for the winter and its high pitched call can be heard in the wood.  Some stay throughout the year but it is likely that the population actually doubles over the winter. The other day I was listening to a flock of Long Tailed Tits and I was told, by someone who knows (thank you Matt), that there were Goldcrest calls amongst the Tit calls. They are very small birds, in fact the smallest bird in Europe. They weigh about 6 gms which is approximately half the weight of a wren and the same as a 10 pence piece. It is a very pretty bird but difficult to see clearly because it is forever on the move. They are seen in the woods through the year but I haven't managed to get a satisfactory photo. I will use a photo I took at Sea Mills in 2013, fortunate that it perched still for several seconds. You can see the gold strip on its head and such fragile legs. Tits of various types forage together in the winter and the Goldcrests often stay with them. This offers extra security  because there are then more eyes looking for predators at a time when the birds might be weak or slow because of cold and shortage of food and the leaf-fall leaves them more exposed. 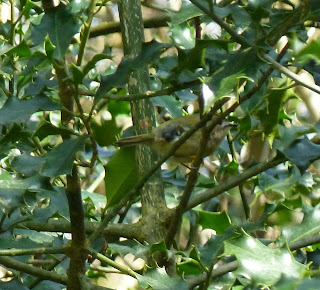 I've put this second photo in because it is a Badock's Bird. It proves that there are Goldcrests in the wood. I took this photo in the Spring. You can see that this bird is well hidden and protected by prickly holly but often they prefer conifers. If you hear a very high pitch call then look up to see whether you can see this very active, tiny bird or whether it is the call of a long-tailed tit like the one below. 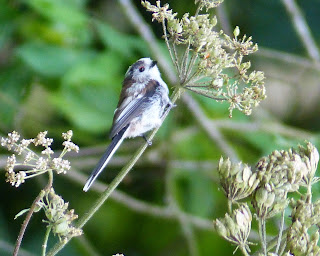 This is a Long-tailed tit that I saw in Badock's Wood meadow in July. They are very agile and it was hanging on the plant but I have rotated the photo clockwise by 90° to make it easier on the eye and brain. They are usually in groups and the long tail is  a distinguishing feature. 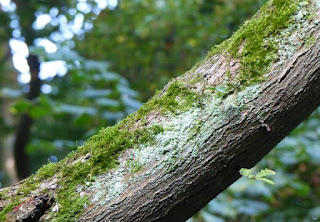 Mosses, like the one on the left are very interesting plants. I was surprised to learn that there are about 20,000 species of moss. I don't know how many different ones there are in the wood but it would be interesting to find out. Often it is a soft, rich green cushion on a fallen trunk or on the bank of the stream and can look very attractive. The life of moss is a bit complicated but if you would like to know more click here. 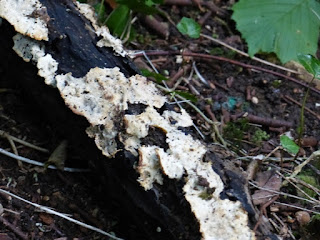 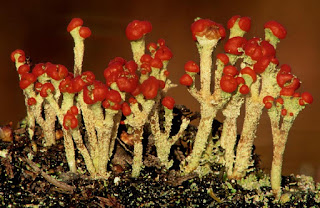 The story of lichen is even more confusing because it is formed when a fungus joins with an alga and they live alongside each other and support each other. Algae range from very simple forms like the blue-green algae which can be single cells or fine strands in streams and ponds, which we saw in the stream a few weeks ago, to the much larger forms such as the sea weeds like kelp and the ones we find on a beach. The fungus and alga are then both changed so that they don't look like either the fungus or the alga. . In fact it is now a lichen. The one on the right is in the wood.


We often see lichen as scales or tufts on twigs and branches but I remember seeing 'matchstick' lichen on Dartmoor although I haven't seen them in Badock's Wood. They are attractive and interesting so I'll put in a photo from the internet. To see on Google Images the wonderful variety that lichen give click here. Or if you'd like to learn a bit more about them click here. 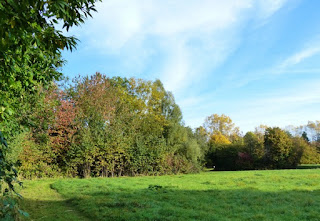 It's still very wet and windy in the wood today (7th Nov) as I finish the blog so I'm putting in a couple of brighter photos. These were taken in the meadow in October. There is frost on the seat but the colour of the trees lifts the scene. 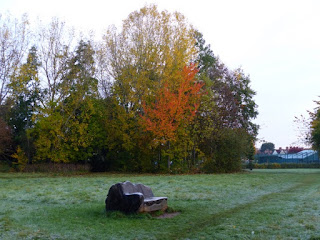 You can see that even when it's damp or frosty there are good reason to dress up warm and dry and get into the wood. Do take care with the damp leaves though; they can be very slippery, especially on the uneven ground beside the stream.


Postscript:  I went to the woods when the rain stopped this afternoon (7th Nov) and was fortunate to see  a Goldcrest and its orange crest very clearly. This was the first I'd seen clearly since the Spring. Unfortunately I wasn't able to get a photo. I should say that it appeared to be alone and not part of any group but possibly it was on the margins of a group.

If you would like to play a part in looking after Badock's Wood then browse the Friends of Badock's Wood website to join the emailing list. Click here.   You can volunteer to help with collecting the litter or to join the work parties that do important tasks such as clearing invasive plants and coppicing. You would be able to do as much or as little as you feel able. Just comment in the email whether you would like more information about the work parties or about litter collection, or both.

If you would like to comment about any subject relating to Badock's Wood or the blog you can leave a message for me at badockswood@virginmedia.com

To follow this blog and to get notification of future posts put your email address in the box at the top right of the page.