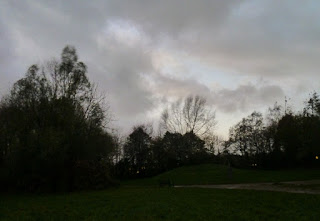 It's been very windy with heavy rain over the last few days. Tuesday afternoon (18th Nov), the rain had stopped so I went to the wood about 4pm. Already it was dimpsy and still very windy. I was a bit nervous of falling branches as I walked under the trees by the Triangle but it was exhilarating to hear the wind rush through the trees and to see them sway above, even the oaks.
I was relieved to get to the meadow and be able to feel the wind out in the open. I was able to watch crows and wood pigeons hurrying back to their roosts but being blown in all directions at the mercy of the wind. Unfortunately the photos give no sense of the wind. 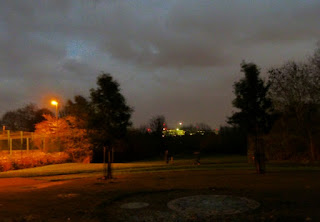 It became dark very quickly and this photo(left) shows Southmead Hospital at its centre and the children's sports pitch on the left. It is taken from the Ceramic Circle near the main Doncaster Road entrance.
It wasn't an evening when most people would walk for pleasure but there were a few taking their dogs for an early evening walk.


Even at about 5pm it was quite dark when I left by the Doncaster Road main entrance and it had just started to rain. I don't feel comfortable walking alone through the woods in the dark so I walked back via Lake Road. (Little Red Riding Hood Syndrome?

The wind was even stronger during that night and the rain heavier. 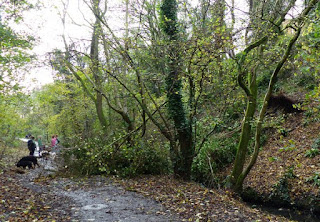 Next morning we found a tree, a Field Maple, across the path that leads from the Lakewood Road entrance towards the Triangle. Unfortunately, it is the same tree that the Sparrowhawks chose to nest in during the Spring. Hopefully, they will find another suitable tree somewhere in the wood. There was a lot of ivy on the tree and that combined with the shallow root system on the slope contributed to the tree's susceptibility to the wind.
Below is one of the Sparrowhawk chicks shortly before it left the nest site in July. 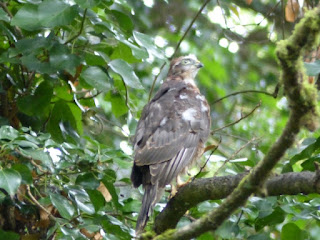 There's a photo of one of its parents in an earlier post. Although these birds eat the smaller birds such as tits and sparrows, it helps to maintain a delicate balance. If the sparrows had no predators then they might increase in numbers to an extent where they actually become a pest as they are in North America. It is dangerous and unwise to interfere with the balance of nature. In 1958 the Chinese tried to eradicate sparrows because they were eating their rice crops.  They didn't realise that the sparrows also ate destructive insects and so rice yields actually fell. So beware of eco-engineering. To read more about the Chinese sparrow eradication campaign click here. 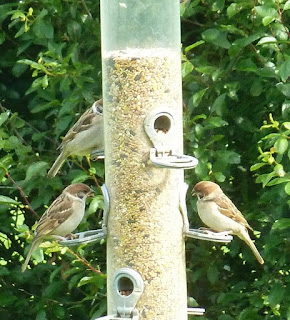 You might notice that the sparrow in the Chinese experience is the Tree Sparrow. This has a brown cap rather than the grey cap of the House Sparrow which is the sparrow we commonly see. I saw the Tree Sparrows on the left at Rutland Water in 2014. It was a common bird in the UK up until the 1970's but is now absent from the South West. It has fallen by an incredible 93% since then but there are now signs that numbers might be slowly creeping up again. It is a lovely bird and can be seen in the Midlands, southern and eastern England. There's a nice piece of video on the RSPB website:  Click here. Also on YouTube: here. 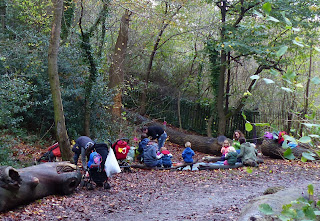 Anyway, I continued from the fallen Maple tree to the area of fallen logs and the Story Teller near the Westbury Wildlife Park. We had a lovely surprise ( I was with my wife) because there was a group of young children enjoying the wood and learning about it at the same time. We learned that this was the Badgers Forest School Bristol run by Jenny Sanderson. I was quite taken by one young man who was offering Jenny a fragment of biscuit. He was so insistent and kind, wanting to share. Unfortunately he dropped it in the mud but it was the thought that counts. If you'd like to know more about the Badgers Forest School you can view the website by clicking here. They were so fortunate with the weather because it had been raining most of the night and soon after school was over, it started to rain again. Well, it is autumn !!

Siân is leading a Friends of Badock's Wood work party, organised for Saturday 28th November at 10am for a couple of hours. We'll be cutting back some of the Sycamore saplings that are invading along the edge of the stream and along the path leading down from the Lakewood Road entrance. If the saplings are allowed to grow they will prevent those smaller plants and shrubs growing close to the ground which would otherwise protect the banks and encourage insects, birds and small mammals. If you feel able to help on this day then drop a line to fobwsecretary@yahoo.co.uk and ask to be added to the group. You can do as much or as little as you want or feel able. Some tools and gloves will be provided but if you have your own you could bring them along. It should be a good morning.

Add your email address to the box at top right of page to receive notification of future posts.