If you're disappointed that I wasn't referring to the group of singers called Wet Wet Wet here is a YouTube link to one of their songs which is easy listening and perhaps vaguely relevant to the woods.. click here for song.
But no, I was referring to the watery type of 'wet'. I got wet on three separate occasions this week but none of it was unpleasant. 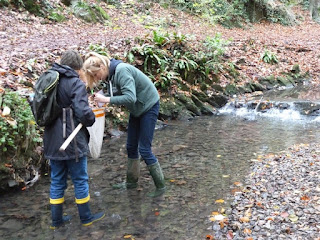 First Wetting.  It all started on Wednesday, but this time I got into the stream wearing wellingtons so I was ok.
At last we were choosing a part of the River Trym within Badock's Wood to monitor for fly larvae. This will give us an insight into the quality of the water in the river. The part we selected because of ease of access and water flow is just below the weir where the two streams join. On this trial occasion we found many water shrimps but only one mayfly larva. This is disappointing because we would expect to find larvae of perhaps 5 different types of water fly. These might be caddis fly, stonefly and types of olives as well as the ones that we did find. Once the site is registered with Bristol Avon Rivers Trust (BART) we will start official monthly recordings and these will be entered on a database along with records from other waterways across the country. If you'd like to know more about BART and the work they do click here.
If you would like to see some pictures of riverfly larvae on Google Images click here.


Second Wetting. On Friday I got very wet. This time we were looking for fungi in the woods. Ruth Revell, who I'd met at the Riverfly training in Calne and who is a fungus enthusiast had offered to lead an informal fungus foray in the woods. It had rained all night and the forecast was not good but the call of the woods was strong. There were five of us and despite being rather late in the season we recorded at least 13 different types including candle-snuff, turkey tail and King Alfred's cakes but one of my favourites is Crystal Brai. 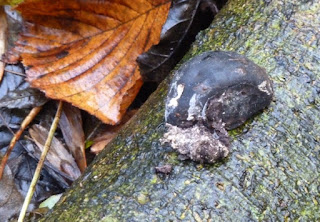 King Alfred (The Great) is reported to have burnt some cakes while taking refuge from the Vikings in the Somerset Levels around AD 880 and the hard, woody fungus (burnt cake) on the left is a reminder. It is very woody and has rings similar to a tree on the underside. (See above right) 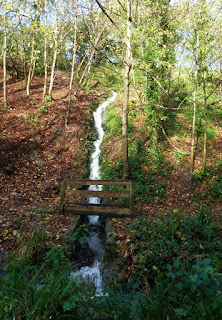 Although it was light rain or dry most of the time we did have a downpour while we were by the bridge near the Westbury Wildlife Park which caused a torrent to flow down the chute. Normally this is completely dry or at most a trickle. As often happens, after the downpour the sun came out as can be seen in the photo on the right. Where does this water come from?
The Sportsfield is at the top of the rise and there are houses to the left of that so the water might flow from the drains which collect the rain near the houses. Drains are one way that toxic liquids can get into the river and poison the riverfly and other creatures.
In the woods we saw mostly woody bracket fungi such as the turkey tail and southern bracket but not many typical 'mushroom types' with caps, which were present in October (see previous posting). However, we did see Fairy Bonnet and Glistening Inkcap. In the meadow, near the pond, we also saw a fairy ring with both Blewit and Waxcap species close together and I've put two of the photos I took of these to show that the pattern of the gills are quite different. The spores, which are the equivalent of seeds fall from these gills. It is interesting to lay various fungi, gill-side down on a waxed piece of paper. After a couple of days the spores will have fallen onto the paper and made pictures of different patterns and colours. Purples, white, oranges and browns. Warming the paper will fix the spores in place. I haven't done this since my girls were young but I must do it again next year with my granddaughters.


3rd Wetting. I went out again on Saturday morning (Nov 14th) .... remember the wind and rain? It was touch & go but we went anyway. I was with Matt Hobbs (ecologist) and we were selecting trees suitable for placing bird boxes. We did get very wet but we were dressed for the occasion. These boxes will be suitable for tits of various types as well as nuthatches. The boxes and their placing will be paid for by a donation from a member of the public. While we were in the wood we saw large flocks of long tailed tits and also several more goldcrests (see previous posting).
I was surprised to be told that blue tits and wood pigeons also move around in large flocks. They might not travel such large distances as swifts or cuckoos but do move around the country and possibly go overseas. Their migratory patterns have not been studied as much as some others and so is a mystery waiting to be solved. There are a couple of YouTube clips and a newspaper report that are worth looking at. The bluetit flock is passing through Sweden but the pigeons were in Portland, Dorset a few days ago. See: blue tit migration.  wood pigeon migration   newspaper report on wood pigeon migration. 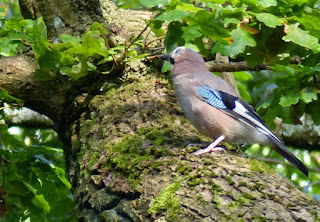 I saw this jay in the woods in September. They are very colourful birds of the crow family. They eat the eggs and young of other birds in season but during autumn one bird can hoard about 2000 acorns for the lean times of winter. It's reported that most of these will be recovered and eaten but some will be left and perhaps grow into new trees. They are members of the crow family and learn quickly. Birds of the crow family are called corvids and as well as the jay they include magpie, crow, jackdaw and raven. All of these can be seen in the wood or over the meadow. Rooks are corvids but are not often seen in parks or woodland within large urban areas.

The Friends of Badock's Wood (FOBW) have an open meeting four times a year. The next one is on Tuesday December 1st at 7.30pm in the Greenway Centre. It is open to anyone who is interested in the management and conservation of Badock's Wood. If you would like to hear what is happening and perhaps give your opinion on what happens next, then just come along. You will be made very welcome. To lean more about FOBW click here.

If you wish to receive notification of future editions then put your email address in the box at the top right of the page.