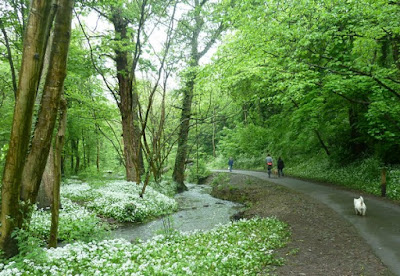 Just a week or so ago we were saying how empty the river was but after a couple of days of rain it refilled and brought the whole wood to life again. It often amazes me how the rain enriches the colour scheme of the wood.... and there is almost frantic bird activity between the showers to collect enough food for themselves and their young before the next downpour. 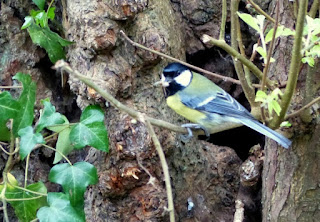 This Great Tit caught a fly of some sort last week and has  brought it back to this hole. It went into the hole with the fly and came out without it so I'm assuming it has a nest there. It's right beside the River Trym and almost at ground level which is unusual. Usually they nest between 1m and 5m and in fact I've seen Great Tits using at least two of our nest boxes in the last few weeks, which are about 3 metres above ground. Look out for the nest boxes and you might be lucky enough to see either great tits or
blue tits using them. To learn more or to hear the call of the great tit click here. 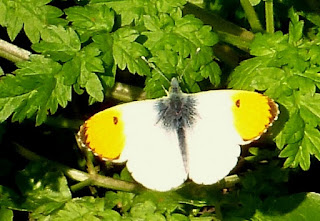 Butterflies need warm weather to fly and so there are very few about during the cooler weather we've been having. Even on sunny days they won't fly if there is a cool breeze. Fortunately we have had some warmer days and there have been quite a few Orange Tip butterflies about on those days. However, it has taken me quite a while to get a photograph of one because they don't settle very often or for long. They are beautiful though and well worth the effort. I thought I saw several white butterflies during my search for an Orange Tip but I later discovered that this was a mistake. 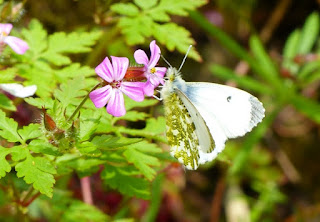 I didn't appreciate that there is marked sexual dimorphism in butterflies as there is in some other animal groups such as birds and mammals. In fact some of the smaller white butterflies that I had seen were in fact female Orange Tip butterflies and it is the male ones with the orange tips to their upper wings. Once I had discovered this I began another search for a female. On a warm day this did not take so long. You can see that it has a black margin similar to the male but with no orange. It can be differentiated from the white butterflies because of its greenish underwing. To learn more about the Orange Tip, what it feeds on and where it lays its eggs click here.  keep a watch for them and then we can look out for the green caterpillars soon. 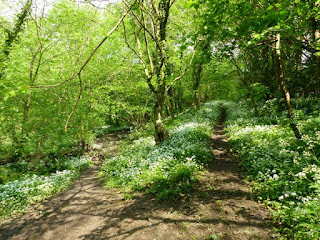 This is the path that  leads from the Triangle along the right hand side of the Trym. It's very muddy during the winter and there are some steep and worn steps part way along. It is hoped that these will be replaced this year to make this area more accessible. 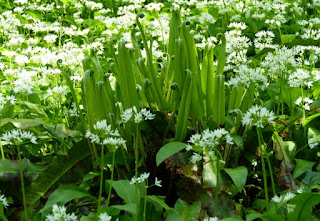 The white flowers are garlic and in amongst them them are some young Harts Tongue fern fronds.  It's interesting that these ferns grow only in damp conditions because they must have liquid water to reproduce. You can see the brown clumps of spores under the larger frond on the left. The spores will fall into the soil and grow into a very small plant that will produce the equivalent of the pollen and eggs of flowering plants. The 'pollen' needs water to swim to the 'egg' and fertilise it, then the result will grow into an adult fern. Ferns are generally very different from flowering plants and you can read more information about them here. 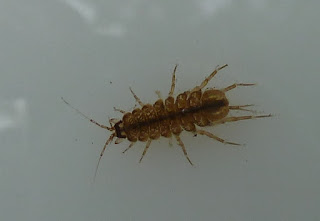 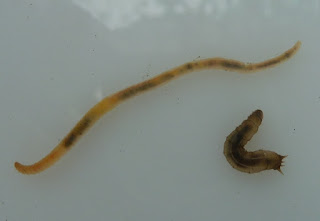 We planned to do our monthly Riverfly check in the stream on Tuesday morning but it rained so much that we had to put it off until Thursday. The benefit was that there was a better water flow and the water was clearer. We were primarily looking for different types of mayfly larvae and fresh water shrimps (Gammarus) but we also found these creatures. The top one is a Hog Louse, similar to a wood louse and it feeds on decaying organic matter so creatures such as this are important in cleaning up the stream and removing debris. They are relatively tolerant of pollution and so will be an important indicator of a severe pollution incident. One of the other indicators is the Olive mayfly larva and we found plenty of those but none of the other types which require cleaner water than we have. The River Frome at Snuff Mills have all eight types but at the moment we can only find two. We have some way to go in improving the quality of the water by controlling what enters the stream from road drains and from poorly connected domestic systems. The Bristol Avon Rivers Trust are working hard at this by education and by improving the conditions in Waterways throughout the region. See BART.
We also found these other two creatures in the water but have yet to find out exactly what they are. 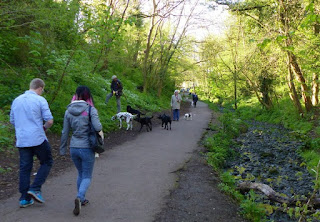 Dogs are very much a part of the Badock's scene. Fortunately most owners are vigilant in picking up after their dogs, but not all and it is also surprising how many owners will put the faeces into a plastic bag and then leave it by the path or throw it onto a bank or a tree.
There seem to be very few aggressive dogs but some are over friendly and jump up. In fact one jumped up on me on Thursday which unfortunately was a muddy day and it left its mark. That owner didn't apologise but I know that some do. It is clear that many people stay away from the wood because of the number of dogs, because some jump up with muddy paws, because of the dog faeces or simply because they are nervous of roaming dogs. This of course will be particularly true for children where some dogs will be as tall as them. Dogs as I say are very much a part of the place but this is a plea for them to be under control so that we can all enjoy the Wood for the Nature Reserve that it is. 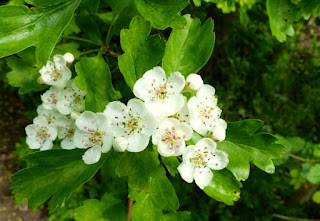 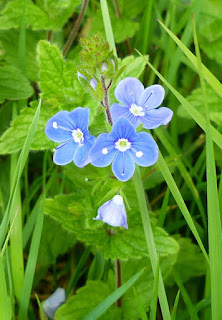 There are many things to look out for in the Wood at the moment like these Speedwell and the Hawthorn blossom. Hopefully we'll get some more warmth with the sun in the days to come to bring out the butterflies. 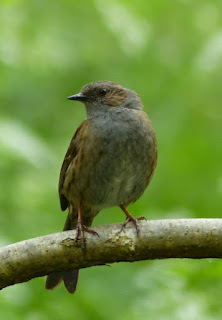 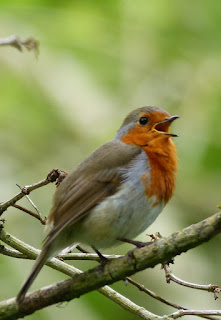 Words that are perhaps wrongly attributed to Mahatma Gandhi but nevertheless convey an inspiring message are: "Be the change that you wish to see in the World".