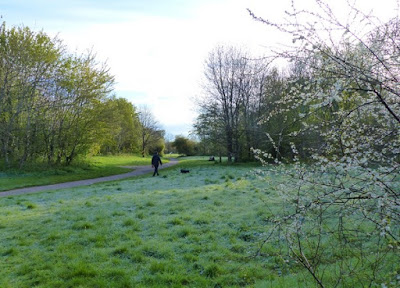 We have had some frosty weather right to the end of April but with that came clear, bright skies bringing the hope that warmer weather can't be far away. 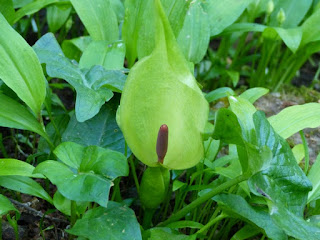 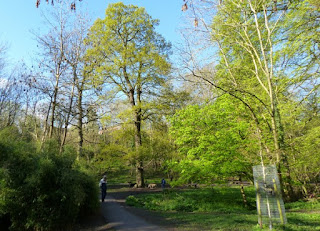 I have always known this plant as 'Parson in the Pulpit' but it goes by many names, including 'Lords and Ladies'. More properly it's called Wild Arum Lily but you might know it by another name. Beware, it is poisonous and contains an irritant. This plant is by the Lakewood Road entrance but there many scattered through the wood, often amongst the garlic. It's interesting because the part that you can see, the spadix,  isn't the flower at all but an elaborate fly trap and the flower is well hidden below. The spadix gives off a rotten odour to attract flies and also can warm the air around it. There are three types of flowers hidden. One type to trap the flies, then there is a female flower waiting to be pollinated, which will then produce berries. Lastly, there are male flowers producing pollen to be taken to other plants when the flies are finally released. The plant cleverly doesn't release the flies until its own female flowers have been pollinated. The berries are initially green but will turn red by the autumn and will be seen as short red spikes close to the ground. They are a good source of food for birds and mammals. You can find a fuller description and some excellent photos here. 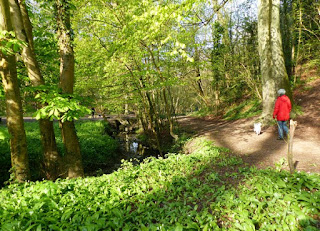 Badock's Wood faces many challenges as an urban nature reserve. We saw last time that litter is a constant problem but although unsightly, by a continual effort it can be kept under control and there's no lasting damage. 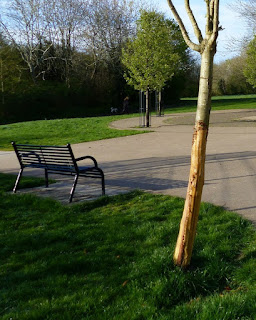 However, we have another challenge which is serious damage to the trees. I'm not sure what, if anything, is going through their minds when the vandals do this but it does leave lasting damage and in fact in the present instance will almost certainly lead to the death of the tree. Last year we had small branches cut off some of the trees and this year even larger branches have been sawn off and left on the ground.

The Council owns the wood and only they can prune or remove plants or give permission for it to be done. Anything else is a crime and liable to a fine. However, the latest damage can only be classed as vandalism and the police are involved. The bark has been stripped from the full circumference of the trunk and the tree is unlikely to survive. 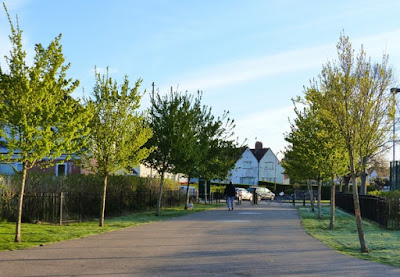 There are a dozen or so trees in this 'avenue' at the Doncaster Road entrance and most of them have had pieces of bark cut off in the last week or so. Fortunately the damage to these isn't as severe but perhaps the vandal will return.
I don't know what the police or Council can or will do about it but it has to be stopped one way or another. 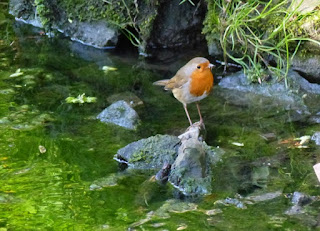 This robin is blissfully unaware of that damage and is only concerned with finding small creatures in the stream. Perhaps he plans to take them to his mate or possibly for chicks because he has kept them in his beak rather than eating them himself. You can see the rich, green algae that has been in the stream for the last few weeks. It appeared over a very short period and was very pretty, brilliant green. It seems to appear because of excessive nutrients in the water although it's difficult to explain where they might come from but also it's growth will have been encouraged by sunshine and light getting to the stream before leaves returned to the trees. 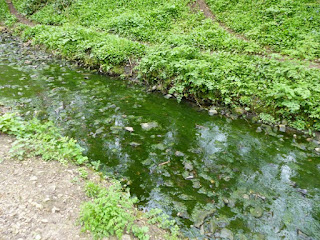 For some reason the weed has been dying over the last week or so and  has been looking very dirty and
unpleasant. The by-products of the dying weed can be unhealthy for water creatures and this will be unfavourable for the robins and the grey wagtails which rely on the stream for food. Hopefully it will clear quickly and leave this part of the stream looking clean again. 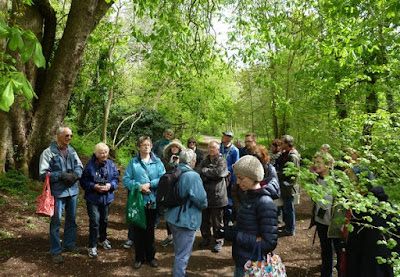 The Friends of Badock's Wood held a successful Bird Walk yesterday (1st May).  The leader, Mary Wood, introduced us to Bird Song and we were treated to the songs of many birds but particularly the wrens, dunnocks and blackcaps were in good voice. We also heard the green woodpecker and the stock dove which is very elusive and spends its time high in the trees. You can see the looks of concentration as we try to pick one song or call out of the several that are singing at one time. Even before we started, a heron flew in and landed by the pond hoping to find a fish for its breakfast and then as we were walking up the path from the Triangle to the Meadow we spotted a pair of Sparrowhawks. One of them was eating a small carcass, presumably a bird of some sort and I'm sure the other was hoping for a share of it. Last year they nested in the wood and raised young so we're are optimistic of further success this year. It was a very enjoyable and instructive morning so 'Thank you', Mary. If you would like to hear some birdsong then log into the RSPB website where you can select a bird species and listen... RSPB birds. 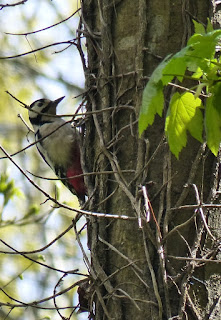 Last time I mentioned the Green Woodpecker, which is seen in the wood. It often feeds on lawns or meadows for ants and other insects. When Siân and I were out with Mary Wood doing a preliminary walk last week we were fortunate to see this Great Spotted Woodpecker down by the stream. At first we heard it tapping at the tree, presumably to prise insects out of the crevices in the bark. Although not clear in this photo, there was no red patch on the back of its neck so this is a female. You sometimes hear the male drumming but that has reduced now because they have paired and he does not have to spend so much time re-enforcing his territory; he can concentrate on food gathering for his family. There are many woodpecker holes in the trees along the stream and it is worth watching these to see if there are any woodpeckers around. Certainly look up if you hear loud tapping, drumming or the green woodpecker's laugh. 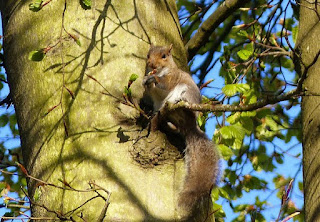 There are bunches of fresh green shoots scattered along the paths of the wood and these are often dropped from trees by the squirrels as they bite through the new stems and nibble away at the buds. This squirrel was very high in a tree near the Wildlife Park and had clambered out of the broken Owl Box in one of the trees there. 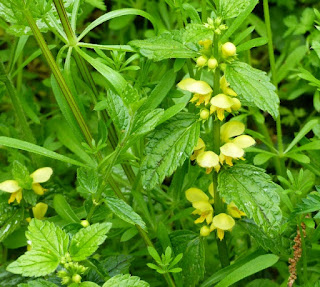 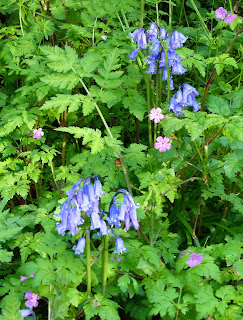 Spring is a wonderful time for flowers and there are many, including these yellow nettle and the Herb Robert mixed with the Native Bluebells. Do take time to see what is about as you walk through the wood and of course listen for the birdsong.

NOTE:
The Friends of Badock's Wood have produced a program of events for 2016 and you can view this program by clicking here.  Then click the 'April to August What's On' link. 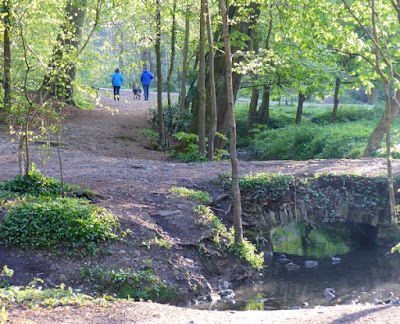 To help keep the Wood clear of litter we have a Litter Pick planned for Saturday 21st May. We will meet at the Lakewood Road entrance opposite the Willowbank Home at 10am and expect to finish before 12.30. If you would like to help please come along but it would also help the planning if you would email me at fobwlitter@yahoo.co.uk . We do provide equipment and gloves but if you have your own please bring them.