The Joy & Beauty which is Badock's Wood 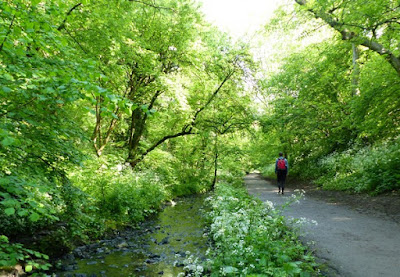 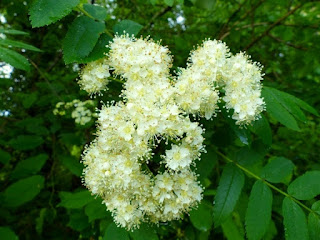 Badock's  Wood is full of interesting sights at the moment. Particularly there is a lot of white blossom. This Rowan, also called Mountain Ash, is by the meadow and in a few months these beautiful white flowers will have developed into brilliant red berries. Of course that depends on a variety of insects being attracted to the flowers by colour and scent to pollinate them. It's fascinating to think that when a single grain of pollen lands on the female part of the flower the grain grows a long tube to reach the egg. Only then can the genetic material pass from the pollen to the egg and the egg can then start to develop into a new plant. Nature is anything but simple but it is the necessity of certain plants to attract insects that gives us the beauty of colour and scent. Of course other plants such as grasses and trees with catkins will use the wind to spread their pollen. 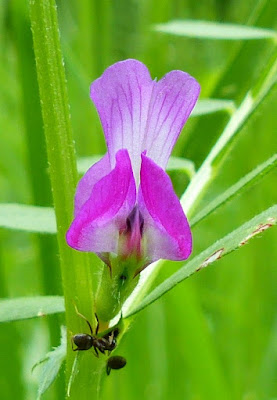 You can see that this vetch, again in the meadow, is attracting insects that hope that the colour means there will be a feed of nectar for them.
To see a simple video of the fertilisation process click here and to read a more detailed explanation   click here. 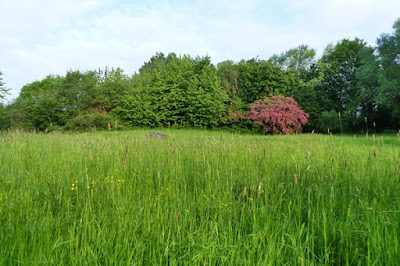 As well as the vetch there is an amazing show of buttercups, clover and many others including colourful dandelion flowers and clocks. You might think that for the meadow to have an abundance of wild flowers it needs to be fed with nutrients but in fact it's quite the opposite. It needs to be kept nutrient poor so that the grass doesn't flourish and crowd out the flowers. When the meadow is cut, at the appropriate time for butterflies and bugs, the grass is removed so that it doesn't compost and feed the soil. 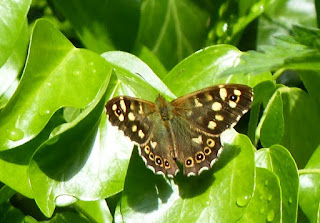 There still aren't a lot of butterflies yet but hopefully when it becomes warmer we will see more. You can see Speckled Wood butterflies such as this one as you walk along by the stream. The males and females are very similar although the male is slightly smaller. The female lays her eggs on  various types of grasses, which are a source of food for the caterpillars. The speckled wood can survive the winter as a chrysalis or as a half grown larva. For more about the Speckled Wood click here. 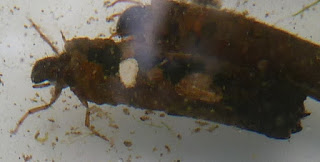 These are two of the organisms that we look for in the stream as a measure of the water quality. In fact I took these photos while I was with Ruth Revell who was monitoring the quality of the River Frome at Snuff Mills. We recorded several other species as as well which shows that the water quality is good. The top one is a Mayfly larva and the fluffy mass on its back are  its gills. These gills will be busy waving in the flowing water extracting oxygen in the same way that our lungs do.
The lower photo shows a caddis fly larva in the case it has made for itself from material it has found on the stream bed. It has bound the material together with silk that it has produced. It's gills are within the tube and it sucks water in from the posterior end of the tube, over the gills and out through the front end. It drags its home around with it by using its front legs.
We have seen a few adult mayflies in the wood but have not yet found any mayfly or caddis larvae during our monitoring in Badock's Wood. This is an indication that the pollution levels in the stream are having an adverse effect on the wildlife. To see adult forms see mayfly and caddis fly.
I use the term 'larva' for immature forms of various creatures but in some cases this might not be scientifically correct. Some immature forms are more correctly called 'nymphs' and if you would like to know the difference between larvae and nymphs then you can see an explanation here. 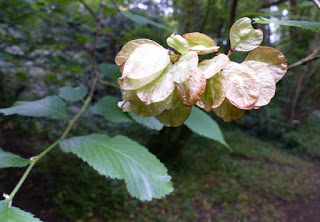 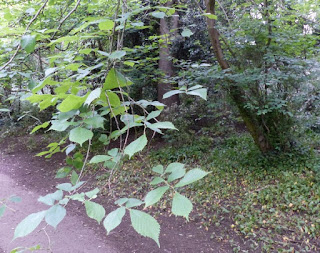 These are the developing seeds of an Elm Tree which is beside the path up to the Sports Field from the Triangle. There are almost no mature Elm trees in the UK because of two Dutch Elm Disease epidemics, one in the 1920's and the other in the 70's. Beetles spread the fungus that causes the disease. When it has killed most of the Elm in an area the beetles can't feed, they die out and the elm can start to regrow but eventually there will be again enough food for the beetles to return and feed and the cycle starts again. It is likely that our Elm tree will survive for a few years but then beetles will come back, spread the fungus and the tree will die.
Trees of all types are regularly falling in the wood but it's sobering to think that in the storms
of 2014 Killerton gardens lost 500 trees and Stourhead lost 400. Also in the storm of 1987 the UK lost an estimated 15 million trees.
One of the great joys that Badock's Wood offers is to be able to escape the noise of traffic, the busyness of the streets and to be surrounded by the peace and calm and the beauty of nature.
It is worth working hard to preserve ! 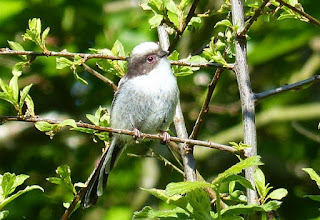 This long tailed tit was in the meadows last week. I must admit that I thought it had conjunctivitis until I looked at photos on the web and saw that they all had pink around their eyes. You might not see the birds but you will almost certainly hear a group of them twittering away excitedly in the trees. You can listen to them and see a piece of video on the RSPB website here.
I have seen Tree Creepers and Great Spotted woodpecker over the last few days and Ruth Revell was very fortunate to see a pair of Dippers in the stream near the Wildlife Park during our litter pick last week. 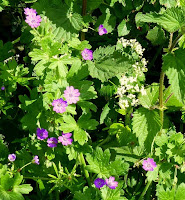 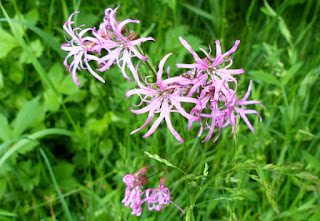 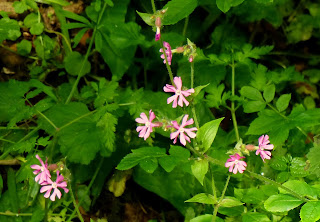 These are three different types of Geranium flowers or Cranesbill in the meadow as well as one of my wife's favourite, the Ragged Robin. Superficially the Cranesbills look similar to each other but on closer inspection they do have differences. Look particularly at the petals but also the leaves. 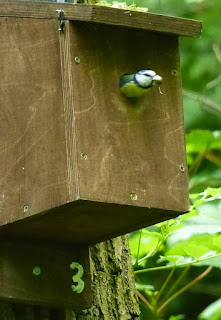 Last time I mentioned that some dog owners aren't careful about leaving dog poo or where they leave their dog poo bags. Well, this bluetit is setting a good example by removing a chick poo bag from its nest and depositing it somewhere appropriate. Well away from its home so that it doesn't advertise that the box is occupied.
I call this No 3 Wren Rise which is on the left of the path from the Triangle up to the Sports Field.
During a walk last week I saw both great and blue tits using 6 of our boxes. These were boxes 2, 5, 11, 14, 20 and the unnumbered box at the triangle. I'd be interested to know if you see birds using any of the other boxes that are spread throughout the wood.
It's amazing how the chick produces the droppings already hygienically sealed for disposal. How long has it taken for Nature to progress from 'nothing' to this degree of complexity?

A while ago I featured a poem  called 'In Badock's Wood' by local poet Mark Hamilton . I'm pleased to say that a book of his poems is being published on June 6th.  The book is called 'In Badock's Wood and Other Poems' and will be available from Amazon and also perhaps from some local bookshops. Mark told me that it contains 16 poems about Badock's Wood and 16 poems about related subjects. If you would like to see more details on the Amazon website see here.
NOTES: